The wait will soon be over for Young Thug fans, the songster having announced a release date for his intensely anticipated “Slime Language 2” album.

Taking to Twitter a couple of hours ago, the songster had announced that the project will be out exactly three days from now – that’s 16 April 2021. The cover art of the project shows several associates of  his YSL record label. You can check it out below. 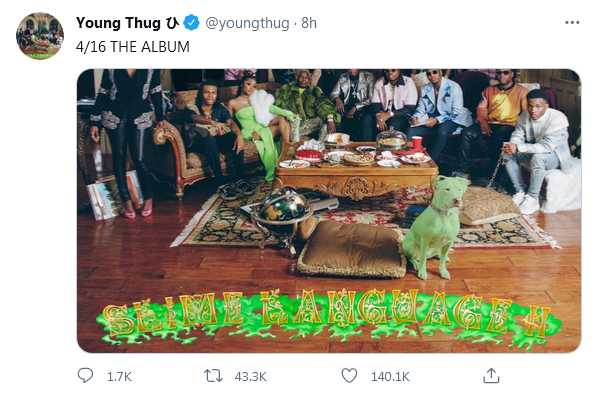 Young Thug had announced his “Slime Language 2” album last year but had not been forthcoming with details until recently. With the news that the compilation album will be out on the 16th hitting the blogosphere, there’s palpable excitement among the rapper’s fans.

The compilation album will feature some of the songster’s previously released numbers, including the T-Shyne-assisted “That Go!” and “Take It To Trial,” a collaborative work with Yak Gotti.

By the way, Toung Thug released the “Slime Language” in 2018. The sequel to that has fevered fans with expectancy. But will it bear as much heat as the original? The coming days will reveal just that.

Are you looking forward to Young Thug’s “Slime Language 2”? why or why not? You may want to join the conversation by dropping your thoughts in the comment section below.