Lady Zamar has had enough of the trolls stalking her on social media and has rebuked them loudly in a recent Twitter rant.

Of course she isn’t the only celeb being stalked online. To be a celebrity is to be open to stalking. It appears unavoidable. Almost everything you do is a subject of conversation and even critical drubbing.

Well, in Lady Zamar’s case, enough is enough. The “Monarch” songstress took to Twitter days ago to describe her stalkers as ignoramuses, urging them to relax. She also described them as annoying.

She is especially annoyed that they are not accusing her of what she knows nothing about nor understands. But will the stalking actually stop? Time will tell. 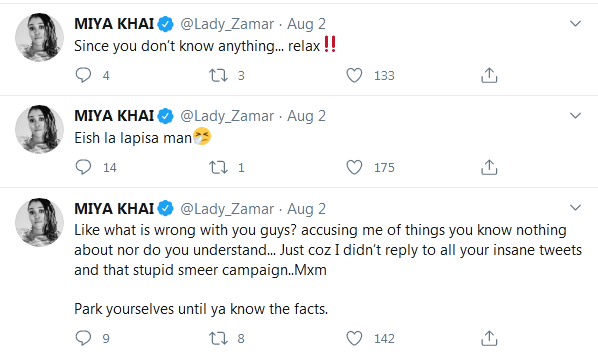 By the way, a few hours ago today 5 August 2020, Lady Zamar revealed she has been writing and writing songs but hasn’t recorded anything yet. She has an album in view though. She could do with some title suggestions right now. Got any? Go ahead and sound off on Twitter.

Well, what do you think of Lady Zamar’s rant? Would she be exploring a new sound in her imminent album? You might want to join the conversation by dropping your thoughts in the comment section below.