Bonang Matheba of the House of BNG has slammed a local YouTuber with a R500k suit for claiming that she had a cocaine habit and had transferred the same to her ex boyfriend AKA.

AKA is currently navigating a difficult bend in his life and career following the tragic death of his fiancée Nelli Tembe in early April. Allegations have been flying around town that he was violent towards Nelli, thanks to his alleged drug habit, and had pushed her to suicide.

The local Youtuber Rea Gopane had claimed that Scoop Makhathini, a radio personality, told him Bonang had a drug habit and transferred same to AKA. With Bonang filing a R500k suit against him, Gopane had quickly backtracked.

In a statement he released on Twitter, Gopane renounced his earlier words, apologizing to Bonang for whatever inconvenience those words might have caused her and promising there would never be a repetition of the same behaviour from him.

While some fans urged Bonang to forgive him and move on, others thought she should use him as a lesson to deter others. See the statement below. 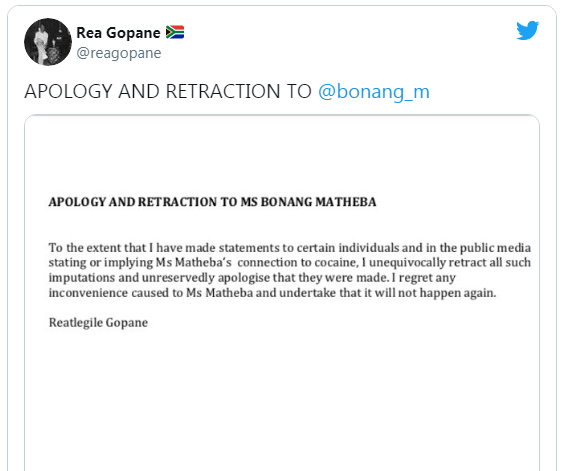 What do you think of Rea Gopane’s apology to Bonang Matheba? You may want to join the conversation by dropping your thoughts in the comment section below.

Tags
Bonang Rea Gopane
John Israel A Send an email 18 May 2021
Back to top button
Close
We use cookies on our website to give you the most relevant experience by remembering your preferences and repeat visits. By clicking “Accept All”, you consent to the use of ALL the cookies. However, you may visit "Cookie Settings" to provide a controlled consent.
Cookie SettingsAccept All
Manage Privacy