Unimpressed by peeps who tried to scam the public by announcing her obituary and calling for public donations (via GoFundMe) for her burial, veteran singer Yvonne Chaka Chaka has called out the fools.

In a tweet, the “I’m In Love with A DJ” singer had raised alarmed about the antic of the fraudsters, calling them fools and describing their action as mean. Two crying emojis indicate how pained she was about the whole thing. It’s the first time she’s had that experience. 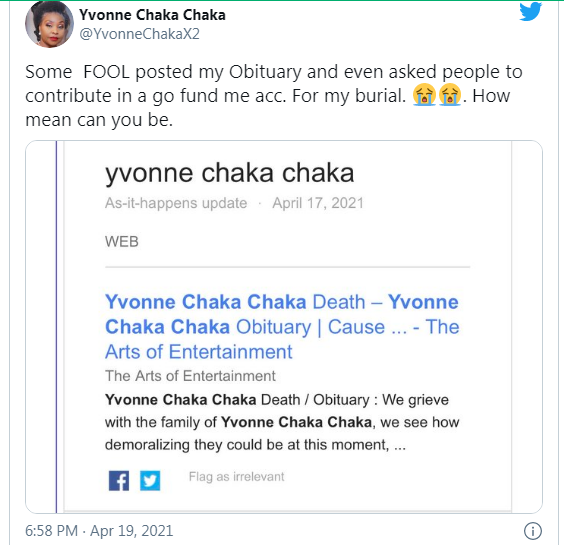 In a follow-up tweet, she described as the devil the person who had attempted to bilk the public by announcing her obituary and calling for donation. In another, she emphasized the need of finding the devil. She also expressed her gratitude to those who had stood by her amid. She’s going nowhere.

By the way, Yvonne Chaka Chaka is but one of several South African celebs in whose name scammers had tried to bilk the public. Other notable figures include DJ Tira and Prince Kaybee.

What do you think of scammers trying to bilk the public via a fale obituary  alarm and Yvonne Chaka Chaka’s response to it? You may want to join the conversation by dropping your thoughts in the comment section below.

Tags
Yvonne Chaka Chaka
John Israel A Send an email 20 April 2021
Back to top button
Close
We use cookies on our website to give you the most relevant experience by remembering your preferences and repeat visits. By clicking “Accept All”, you consent to the use of ALL the cookies. However, you may visit "Cookie Settings" to provide a controlled consent.
Cookie SettingsAccept All
Manage Privacy