Moments after Cassper Nyovest went on a wild social media rant claiming that nobody in the industry had ever had his back, rapper Zingah has come out strongly to ask for forgiveness. Possibly, Zingah felt a tad of guilt having joined the anti-Nyovest movement of rappers who are always throwing shades at the Destiny hitmaker.

It’s public knowledge that Cassper Nyovest has been at the receiving end of most insult-hailing sprees in South Africa’s rap industry. At one time, Zingah was quite bitter with Cass having had a beef with his label partner, DJ Maphorisa.

Both Maphorisa and Zingah are signed to Blaq Boy Music Corporation. Therefore, it makes sense that the Dlala hitmaker took Phori’s side during the squabble between him and Cassper.

In spite of this, AKA has been the most notorious when it comes to shading Cass. It’s likely that Nyovest’s emotive social media post on the endless backstabbing in SA’s music industry was inspired by his beef with AKA. Other than AKA, the singer has also dug deep rifts between him and the likes of Emtee, Ruff, Stogie T, and Riky Rick.

During his recent disclosure, Refiloe Phoolo blamed the industry for being subjective, giving an example of how other rappers came in to support AKA when things were bad for him. The same so-called friends were mute when Kiernan Jarryd Forbes was swearing on Nyovest’s parents and calling him all sorts of names.

Either way, Zingah said that he is sorry for him and his woes. 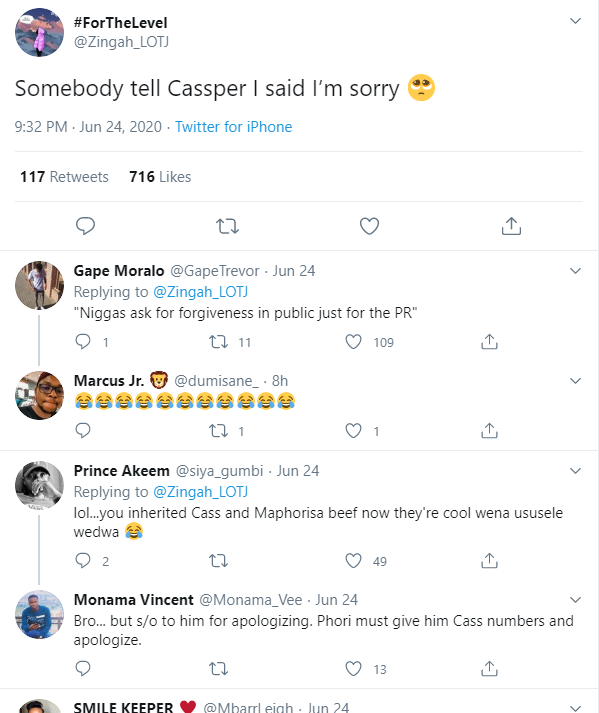