AKA recently had a moment of introspection and wondered out loud that years ago, everyone was way too invested in getting a record label deal.

He is right, of course. But would people have been too keen for a record label deal if things were the way they wanted? If they had all they wanted? Therein should lie the answer – or so Zola 7 made apparent in his response to Kiernan.

In his reply, the celebrated kwaito artist reminded AKA that when people were broke, all they had was their talent. Still, without quality studios and with no money for mixing, mastering and other expenses, they had no choice but to start from where they would get a foot in through the door – this time by snagging record label deals. 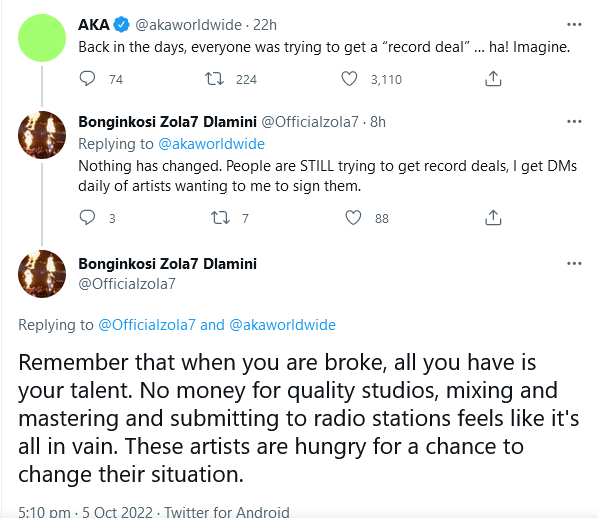 He has a point, of course. And AKA himself didn’t have things perfect at the outset. Before emerging as one of the key voices in South African rap, he had his own struggles.

A veteran and a fine musician himself, Zola 7 should know what he’s talking about. He’s come a long way, dropping the bars and collaborating with other musicians. Although he struggled financially in the later part of his career and had to accept aid publicly, he remains a fave.

Tags
Zola 7
John Israel A Send an email 6 October 2022
Back to top button
Close
We use cookies on our website to give you the most relevant experience by remembering your preferences and repeat visits. By clicking “Accept All”, you consent to the use of ALL the cookies. However, you may visit "Cookie Settings" to provide a controlled consent.
Cookie SettingsAccept All
Manage Privacy