The charm of amapiano is so much that Family Tree boss Cassper Nyovest, a notable hip hop artiste who had released amapiano tunes previously, had promised to return to the genre this year. He made that promise in late 2020.

The producer of the “Anxiey” fame, who had once accused fellow musos of being clueless on how to put albums together, made it clear in a recent tweet that Cassper Nyovest shouldn’t abandon hip hop for amapiano because others are doing just that.

He said that his opinion that Cassper stick with hip hop and not ditch it for amapiano is entirely without malice. By the way, Cassper Nyovest is yet to respond to Zoocci Coke Dope.

Given how fiercely he had declaimed his plans for amapiano in 2021, it is unlikely Cassper Nyovest would abandon plans to drop an amapiano number this year. 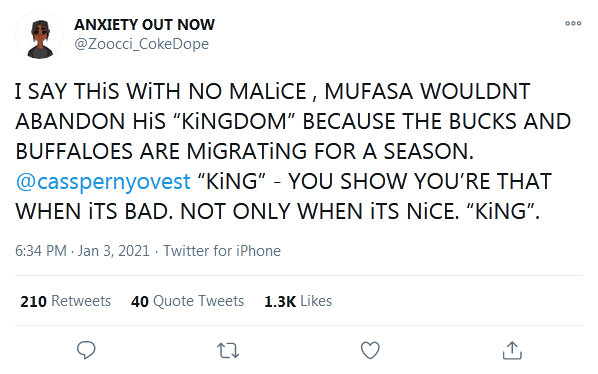 What do you think of Zoocci Coke Dope’s thoughts on Cassper Nyovest ditching hip hop for amapiano? You might want to join the conversation by dropping your thoughts in the comment section below.