It seems like yesterday when Mzansi DJ and producer Busta 929 caught all our ears. The talented muso quickly gained love from the fans, and his following began to grow. He also increased his level of delivery and has since dropped the projects “Undisputed” and “Undisputed Vol 2”.

Both albums became massive successes and gained praise from the fans. As expected, Busta 929 has finally dropped the third instalment for the “Undisputed” project, and the fans are impressed with it. The brand new album proves that he has not lost touch even with all of the work he’s been putting in since the previous year.

When he unveiled the official tracklist for the project, fans knew they were in for a great time. While some of his frequent collaborators made appearances in this new project, a few new guests were also included. The new album showcases Amapiano in the best ways and digs into Busta’s creative side just like the previous projects did.

It would be accurate to mention that the new album follows his tribute EP to late friend and DJ, Mpura titled “Umsebenzi Wethu Vol. 2”. Now, read our extensive review of the entire album. 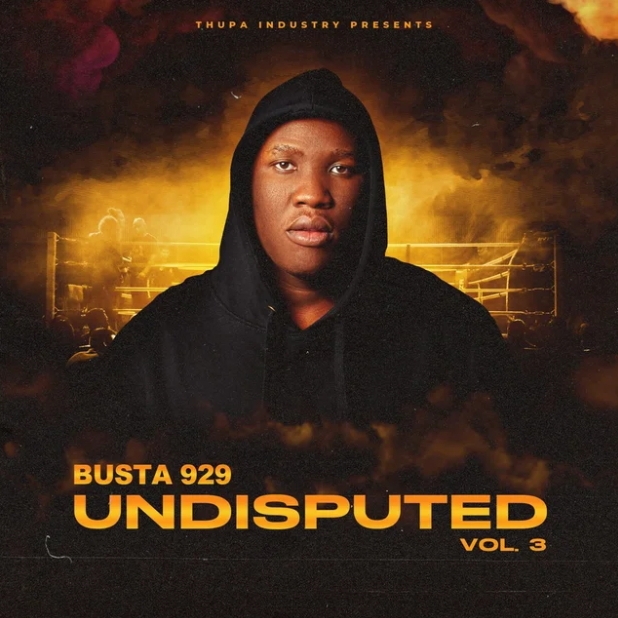 If you followed the creative processes for the artwork of the first two projects, you’ll notice that Busta likes to go with how he feels about each project. Sometimes, minimalism is all that he opts for. For example, the first artwork just features a photo of him, while the second seems more intense.

This time, he chooses not to do much again. The cover art features a half-shot photo of the Amapiano DJ in a hoodie. He stares blankly into the camera. There seems to be a boxing ring behind him. This implies he’s ready for a fight (or to deliver with the project).

If you’re going to have a project filled with 17 tracks, there is no doubt that it will feature several guest contributors. Busta has always been one to give room for contributors on his project.

The Mzansi star features other hitmakers on all the tracks on the album except the bonus one. They include Almighty, Zwesh SA, Lola SA, Xavi Yentin, Mzu M, Dinky Kunene, Boontle RSA, Focalistic, Zuma, Soulful G, Lady Du, Bob Mabena, Mafidzodzo, Nobantu Vilakazi, and Siya Mzizi. All the featured artists deliver well on the project.

It is safe to say that Busta 929 handles the majority of the production of the songs on his project. Guest contributors who are also producers equally contribute to the song’s production. Everyone knows that Lady Du contributes vocals and is also involved with the production process of the songs that she features on. Busta and his guests paint Amapiano in an impressive light on the album’s production. Also, the artists who contribute vocals to it do not disappoint. Everyone is on point with their delivery framing the project into the fantastic body of work.

Songs on the new “Undisputed Vol. 3” album are delivered in Zulu. Busta 929 and his featured guests put in good work to make the project what it turned out to be. The “Umsebenzi Wethu” star has proven with all the albums and EPs he has dropped over time that he is excellent at working with other artists and DJs. His best is always delivered to the project, and his fans end up not being to get over the work he put out. So it would be wise to check out this beautiful body of work.

Tags
Amapiano Busta 929 Review
John Jabulani Send an email 28 February 2022
Back to top button
Close
We use cookies on our website to give you the most relevant experience by remembering your preferences and repeat visits. By clicking “Accept All”, you consent to the use of ALL the cookies. However, you may visit "Cookie Settings" to provide a controlled consent.
Cookie SettingsAccept All
Manage Privacy