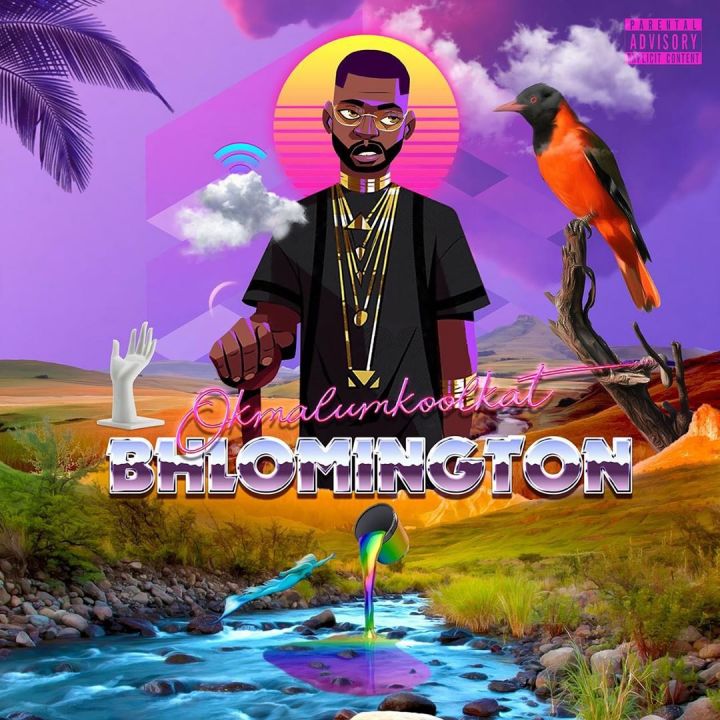 A track-to-track review of the latest chart-topping EP by Mzansi rapper, Okmalumkoolkat.

After 4 long years of releasing his debut studio album “Mlazi Milano” which earned a Gold certification in 2018, Mzansi rapper Okmalumkoolkat finally came through with a followup project titled “Bhlomington”. The short length project houses 6 tracks, one of which was released before the EP dropped.

The brand new EP was released on May 29th 2020 after being pushed back from its initial release date. After its release, the EP hit number one on the iTunes albums charts obviously from popular demand. Fans of the talented rapper have since praised him for keeping up with his known energy of delivery.

Now, here’s a review of the entire project, track by track.

The EP’s opening track iNkunzi is a perfect welcome into to the project. It is a beautiful blend of Kwaito and Hip-Hop. It first starts off with repetitive lines, and then crescends into the song proper. The track was produced by SUUP ZULU. It’s one of those bop-ready songs you’d find Cassper Nyovest doing. Okmalum delivers a steady rhythm that sort off expands as the song plays.

It is followed by the second track Amakamera Ang’shoote; a more toned down Hip-Hop joint that drips so much swag. On this one, Spova goes on a hype spree. It is one of those songs that’s perfect for making an entrance.

The beat is more mellow than that of the first track, instead of a party, it spells chill time. From the swaggered-up wanna-be lyrics to its smooth rhythm, Okmalum perfectly becomes the song. Kenzie Beatz is credited for the song’s production. “Amakamera Ang’shoote” was previously released as a single before the EP dropped. It is the only song which has been released from the project.

The next joint is SA trap at its best. The song titled “The Mpahlas” was produced by the very talented Zoocci Coke Dope. It starts off with a piano led intro, while Malum delivers repeated lines before the song finally takes off as the beat booms.

It is pure, unadulterated trap, and Malum rides the beat like it was sown to his skin. One cool thing about this track is the fact that it is one of the simplest songs on the EP. From its beat to the lines, there are no extras, and it still comes out perfect.

The track is followed by “Ooh Ya Ishu“, a joint produced by 2 Kriss. There’s an even more relaxed tone with this one. The song is laced on a background of a trap beat while piano chords and a flute tune spice things up.

This song hasn’t gotten as much credit as it deserves on the EP. Malum delivers laid back bars that rest on a chorus of “Ooh Ya Ishu“. It feels more like modernized story telling. The talented muso feels more at home as he delivers his lines on it.

The next track, “Hawaiian Master 1” features Da L.E.S. and Zoocci Coke Dope makes his second appearance as a producer on it. It’s practically a gathering of greats, Malum first takes the floor as he delivers a dope verse for the beat, while an energetic Da L.E.S emerges and handles the rest. We must say, Okmalumkoolkat was made for trap music. His flows are very unique and perfect for the beat he’s sampling.

The last track on the EP is Drip Siphi Iskorobho, produced by G Star Beatz. This sees the talented emcee don his rap pants once more as he murders the beat. It is a perfect exit from the project, from his bars to the rhythm, it’s more about him than it is about the song. That alone makes it an amazing listen.

The “Bhlomington EP” is Okmalumkoolkat’s gift to fans after a long while. The EP more than  beauties SA trap, it showcases the genre in various forms. We hear there’s a full album coming next.

Tags
Feature Okmalumkoolkat Review
John Jabulani Send an email 9 June 2020
Back to top button
Close
We use cookies on our website to give you the most relevant experience by remembering your preferences and repeat visits. By clicking “Accept All”, you consent to the use of ALL the cookies. However, you may visit "Cookie Settings" to provide a controlled consent.
Cookie SettingsAccept All
Manage Privacy