There’s “Trouble In Paradise,” but certainly no trouble for the soul of the music lover. South African singer Shekhinah’s album is here and it’s got some fire to it.

Prior to releasing the project, the songstress had teased a couple of numbers from it, giving fans ideas of her creative energy and what to expect as a whole. Looking back, one might say she followed the right path. What’s on the table is worth a music lover’s attention.

The body of work, which houses 12 tracks in all, is no trouble for the songstress. It was a blessing in the sense that she actually may not have had time for the studio. The coronavirus pandemic came and she somehow found herself in the studio, recording.

One might say that the result of her studio session is worth embracing. The songstress begins her “Trouble In Paradise” journey with “Tides,” a beach tune that might bring some fine memories to lovers of theout of doors.

As Shekhinah would say, ideas of the beach – or the open ocean – help her to understand life and the world around her generally. Her “Tides” track is rich in imagery and easy to love. Hop on it.

In “Not Safe (intro),” one appears to walk into a pall of gloom. In a world bedeviled with uncertainty and violence, this song comes as a window into the uncertainties. The story in the song is of Shekhinah’s personal experience – not feeling safe, and wanting safety and somehow not getting it. 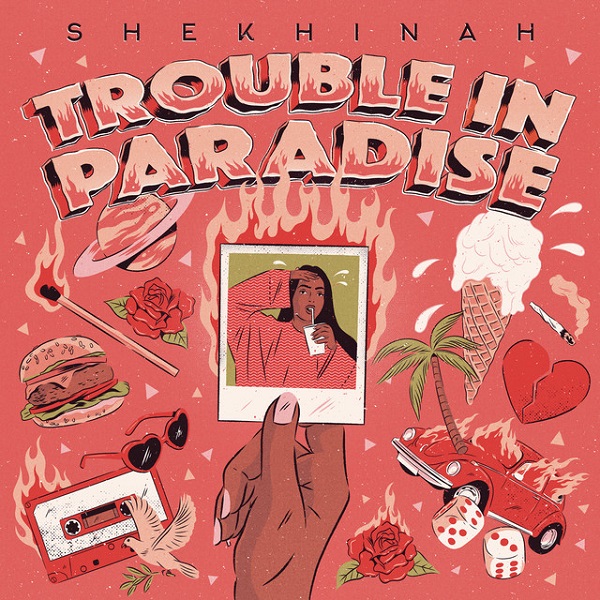 On the surface, “Miserable” appears to bring the ideas or uncertainty and foreboding. The song is not one that will make you miserable, though. For this track, the songstress worked with Goofy, who also worked on her previously released “Rose Gold” album of 2017.

Things kinda brightened a little with “Fixate,” a song for which Shekhinah co-opted the Kenyan songstress Bey T. working with Bey T is no accident. Shekhinah actually admired the singer and Kenyan musicians as a whole. She credited Kenyans with supporting her music, so her love for the country and its people comes easy. The song was recorded while Bey T was in South Africa.

In “Questions,” Shekhinah had apparently fallen in love with her best friend. Then comes the question, what if he should break her heart and so hard, too, after moving from best friends to lovers? The song is one just about any soul who has loved can relate with.

In the follow-up track, “Fall Apart,” which featured Luke Goliath, Shekhinah created an environment for appreciating that things may not often go as we plan it or want it, especially in relationships. The experience might be hers but it’s also the experience of many out there. too. A highly relatable number – this.

For her “Pick Up” tune, Shekhinah worked with Una Rams. Apparently she had been sent the beat of the song and she loved it. A fine number grew out of that love. The song is something to explore over and over.

In “Insecure,” Shekhinah shares a basic truth, which is that even those we think are secure have their insecurities – most times hidden. She has hers, too. One might have friends, but this doesn’t take the insecurity thing away. One can have friends and still be lonely, fighting one’s battles alone.

“Diamonds Do” flashes the cool side of the songstress – how she feels about herself with her grills on. Unlike most of the previous numbers, this one is patently upbeat and compensates for the darkness of previous songs.

Written when Shekhinah was in a relationship, the follow-up tune, “Wedding Song,” might not take you to the altar, but it will certainly bring light to your soul. True to its title, the song might be played with great impact during a wedding. Love and devotion are the messages here.

“I Love It Here,” the 11th track in the compilation, will especially appeal to lovers of a good time. There’s great emotional energy to this song that’s hard to miss. If you were a little crazy growing up, this song might throw up some fine memories.

Things get truly “Beautiful” in the 12th and final track of the compilation. The song appears to be for the girls and illumines the vitality of not looking up to the guys for the affirmation of their beauty.

“Trouble In Paradise” is a compilation to explore.