Mzansi’s J Molley drops a new number titled “Fake People” in collaboration with his pal CKay. The song occupies the 4th position on the tracklist of J Molley’s imminent “All Is Fair In Love And War” mixtape.

“Fake People” is an intriguing title, and so is the song itself. In fact, on the strength of the adopted title alone, we see many people out there desiring an encounter with the song. The encounter should be worth it, we might add.

“Fake People”sets the tempo for what is imminent. And we might volunteer that it might be something interesting. In the interim, however, you might want to embrace what is playing. The song is worth every second of its three minutes.

Hankering for something energetic and insightful but bereft of boring bends? Well you’ve got that in the song in review. Go ahead and make room for “Fake People” on your playlist. Way to go!

How would you rate J Molley’s “Fake People” song? Do you agree with the message? You may want to join the conversation by dropping your thoughts in the comment section below. 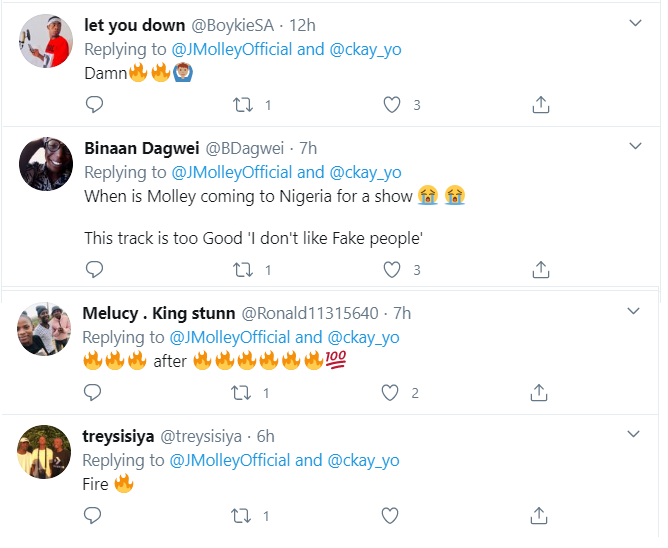 Tags
C-Kay J Molley
John Israel A Send an email 9 October 2020
Back to top button
Close
We use cookies on our website to give you the most relevant experience by remembering your preferences and repeat visits. By clicking “Accept All”, you consent to the use of ALL the cookies. However, you may visit "Cookie Settings" to provide a controlled consent.
Cookie SettingsAccept All
Manage Privacy