Apparently muso Somizi and his pal Vusi Nova were cooking something in the studio. Now they have it ready to release it to the world. The latest effort is titled Ntandane and it is the final release of the year from both artists.

Vusi Nova announced the imminent release of the collaborative tune, which he didn’t name just few days ago, with Somizi. He said fans were never ready in a recent Instagram post while urging them to look forward to the song on Thursday, but he later postponed it till Friday midnight and here we have it.

Vusi Nova and Somizi are firm friends, so it isn’t surprising they should link up for a number. Given how close the two are, one expects what their collaborative tune to be emotionally stirring. 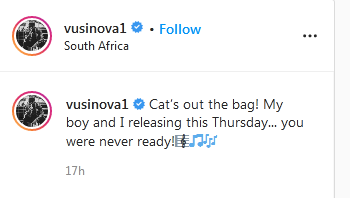 Fans are all for the two dropping something, as should be obvious from the reactions to Vusi Nova’s post when he announced the release. The post has tracked so many flame emojis. And the emojis are still pouring in.

Anyway, having listened to it, Ntandane is definitely the best give Vusi Nova & Somizi  can give us fans for Christmas and New Year. We confirm, though, that their voices on this song is angelic and the lyrical delivery is top notch. If you have big expectations, you are not disappointed on this one.

Tags
Somizi Vusi Nova
John Israel A Send an email 4 December 2020
Back to top button
Close
We use cookies on our website to give you the most relevant experience by remembering your preferences and repeat visits. By clicking “Accept All”, you consent to the use of ALL the cookies. However, you may visit "Cookie Settings" to provide a controlled consent.
Cookie SettingsAccept All
Manage Privacy