Tminzy teams up with ATM king, Emtee on his new song “Natural”.

Nigerian-born artist, Tkinzy is making moves to be at the top of the game in the SA music industry. He’s been putting in a lot of work to achieve that for sometime now.

Last time he made a lot of noise with his song “Shake Ikebe” which featured Nigerian rapper, Emmy Gee. The song became a hit, and further announced him. For a while now, he has hinted on a collaboration with “Brand New Day” rapper, Emtee. He’s shared photos of them together in a shoot to his social media pages.

Now, he has released the song. He calls it “Natural” and Emtee does an amazing job on it. As expected. This looks like it’s going to do very well on the airwaves. You really should check it out for yourself. Listen, and add it to a playlist. 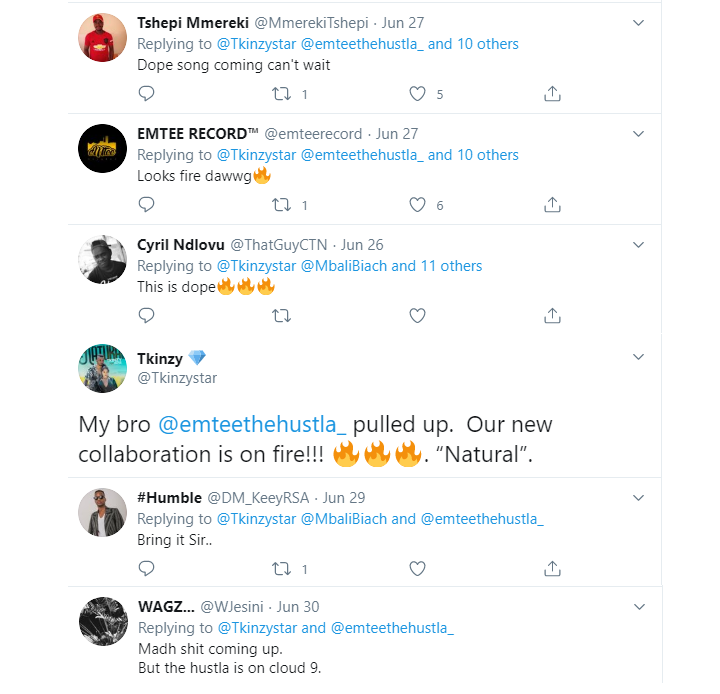 Tags
Afrobeats Album Emtee Gqom Nigeria Tkinzy
John Jabulani Send an email 3 July 2020
Back to top button
Close
We use cookies on our website to give you the most relevant experience by remembering your preferences and repeat visits. By clicking “Accept All”, you consent to the use of ALL the cookies. However, you may visit "Cookie Settings" to provide a controlled consent.
Cookie SettingsAccept All
Manage Privacy