South Africa’s acting orbit is on shock right now following the announcement of the death of one of its own, Luzuko Nteleko. He was 36

Until his death, the actor, who was fluent in English as well as Shona, Sotho, Zulu and Xhosa, was said to be battling brain cancer, a condition he had fought since 2019. Even in his illness, he, alongside family members, was optimistic of a positive outcome. Sadly he succumbed to death on Monday 21 June.

A day after, his sister Nomsa Nteleko had taken to Twitter to let the world know he’s no more. The caption to her post indicated she groped for words to express her grief and just can’t process the fact that he had to die so young. See the tweet below. 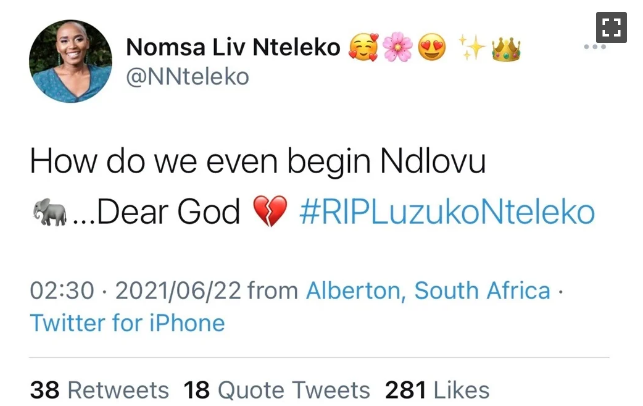 Following the announcement of his death, fans and fellow actors alike had taken to social media to express their grief as well the impact t he made on the acting scene prior to his death.

Joy Zelda described him as another fine talent – lost. Luzuko Nteleko will be sorerly missed for the live he brought to the characters he played.

Got some kind words to share with the late actor’s family? You’re welcome to srop them in the comment section below