Notable venda artiste Makhadzi is heartbroken her hit single “Matorokisi” did not earn a SAMA (South Africa Music Awards) nomination this year. However, she congratulated those who made the nominee list.

In a tweet on 10 July, the songstress cheered this year’s SAMA nominees. She is heartbroken that after what the song did to Africans in 2019, it still failed to earn her a nomination. She clarified that she submitted the song; it just didn’t make it to the list.

She concluded by acknowledging the love and support from her fans.

Here she had the backing of Family Tree boss and Def Jam Africa signee Cassper Nyovest, who shared her tweet, adding some important words of advice for her.

According to the “Amademoni” star, “Queen” Makhadzi should keep grinding and forget awards. He said love from the fans is the greatest award an artiste can have. He added that an artiste would have a long and successful career when there are people who love her genuinely.

In fact, according to Mufasa, some people cart away awards and simply vanish the following year. 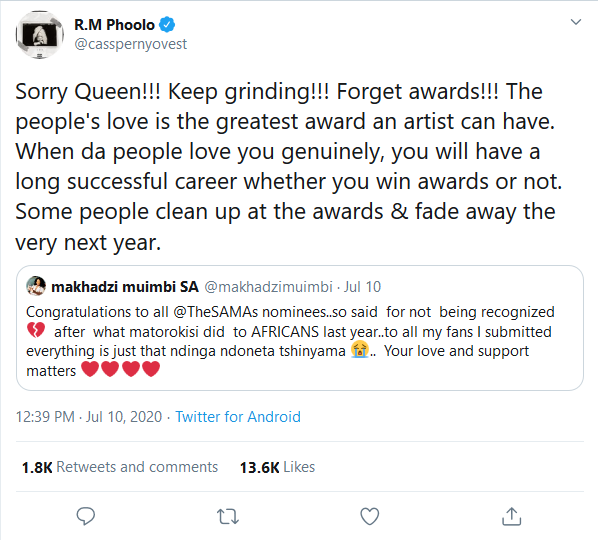 On this, he has some point, perhaps – or so some of his fans are saying on Twitter.

You may have your say in the comment section below.