Kiernan Jarryd Forbes, the South African rapper who goes by the stage name of AKA, has just joined the league of Mzansi celebs supporting embattled former president Jacob Zuma is his battle against the Constitutional Court.

Zuma has been convicted for contempt of court and jailed for 15 months, but the former president is still in his palatial home in Nkandla, with his supporters warning that any attempt to take him away and to jail would lead to war.

Amid the crisis, several celebs have been showing support to Zuma. Notable peeps who have voices their support the former president include L’vovo Derrango and Big Zulu.

The latest to join those supporting Zuma is AKA. According to the “Fela in Versace, ” rapper, who shared a picture of Zuma donning his ANC cap, the former president fought for freedom and therefore has his support.

AKA’s take on the battle between the former president and the state provoked mixed reactions. Wh 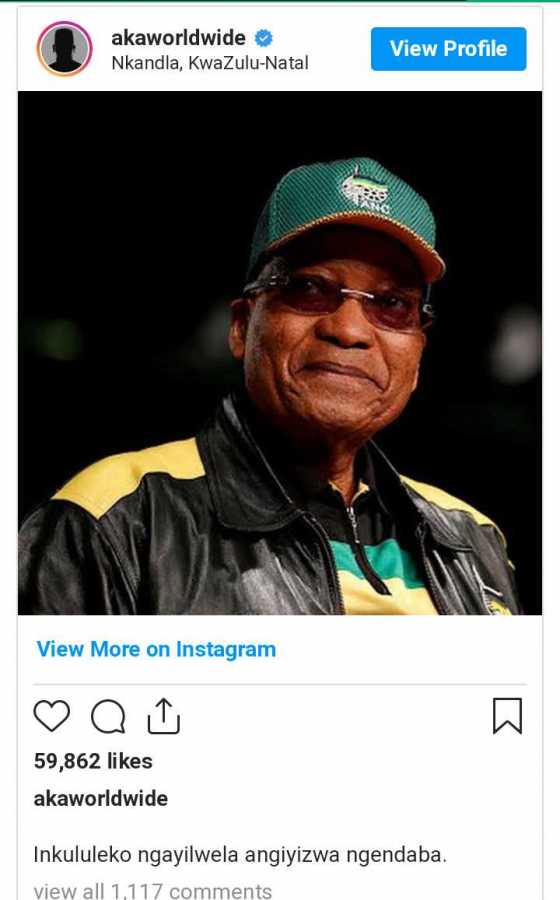 ile some social media users supported him, others urged him not to meddle in politics.

Well, what do you think of AKA supporting Jacob Zuma in his battle against the Constitutional Court? You’re welcome to join the conversation by dropping your thoughts in the comment section below.

Tags
AKA Jacob Zuma
John Israel A Send an email 7 July 2021
Back to top button
Close
We use cookies on our website to give you the most relevant experience by remembering your preferences and repeat visits. By clicking “Accept All”, you consent to the use of ALL the cookies. However, you may visit "Cookie Settings" to provide a controlled consent.
Cookie SettingsAccept All
Manage Privacy