AKA says he doesn’t need the support of other celebrities.

If you think crashing a celebrity party would help you meet AKA face to face, we’re sorry to tell you that that isn’t happening. Supa Mega is not about that life. Those are not our words, but his. Supa Mega recently made the reveal via his usual platform; Twitter.

The “Cross My Heart” hit maker revealed that he doesn’t really support celebrities because he doesn’t need them. In his own opinion, they don’t buy any of his works, the fans do. So, there’s really no reason to support them. He also stated that he doesn’t attend fancy celeb parties.

He doesn’t go to celeb houses and also doesn’t hang out in their cliques. He declared himself, “the alpha & the O-MEGA of celebrity culture in Mzansi. Of course, Supa Mega will always sneak in that he’s the greatest to ever do it.

“I don’t need the support of celebrities to be successful in ANYTHING I do … they don’t buy shit, you do.

I don’t hang out in their cliques … I don’t go to their houses, attend their lil parties & dinners because when it comes to “celebrity” culture in this country, I am the alpha and the O-MEGA,” 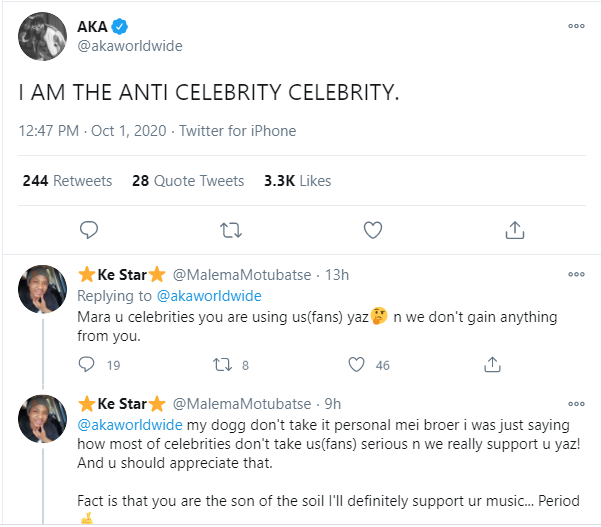 Tags
AKA
John Jabulani Send an email 2 October 2020
Back to top button
Close
We use cookies on our website to give you the most relevant experience by remembering your preferences and repeat visits. By clicking “Accept All”, you consent to the use of ALL the cookies. However, you may visit "Cookie Settings" to provide a controlled consent.
Cookie SettingsAccept All
Manage Privacy