South African rapper AKA is unimpressed by his celebrated compatriots who had condemned Tyrese for slavery claims yet are silent on xenophobia, a problem for which South Africa is famous.

Recently the world was shocked when images of native South Africans burning foreigners and looting their shops circulated online. The issue snapped the world’s attention and then died down. Some celebs had weighed in on the issue then, and others had been silent.

Now another issue has cropped up, and AKA, mastermind of “Monuments” and other fine numbers, is displeased celebrities who had been mute during the xenophobic attacks on foreigners in South Africa are suddenly finding their voices. It’s nothing short of hypocrisy, according to him.

In case you missed it, here is the backstory: Days back, Tyrese, an American rapper and record producer, had shared on Instagram an image of white men in chains while a black man watched over him. he further claimed blacks were enslaving whites in south African at the moment. his claims were dismissed and his person condemned around the world.

South African celebs are among those who condemned Tyrese. AKA is unimpressed.According to him, why weren’t these celebs as vocal when a xenophobic wave swept across the country? Check out his tweets below: 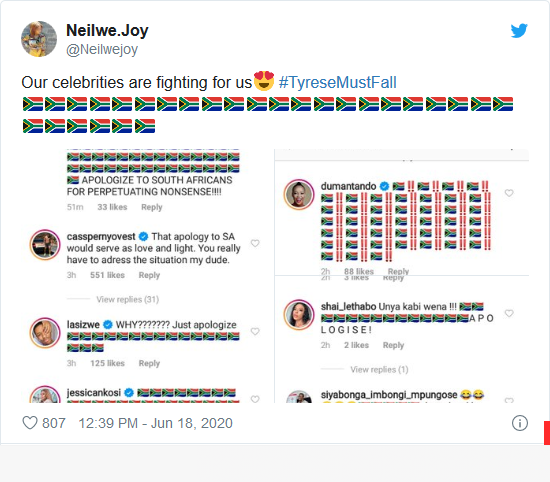