AKA has fired another shot at hip hop rival and Family Tree boss Cassper Nyovest, stating that if someone swore at his mother, he wouldn’t even bother with the formality of a ring but would fight the person there and then.

In making that statement, he was actually mocking Cassper Nyovest, who had stated he wouldn’t fight AKA in the streets as that would make him look like a hooligan and rubbish his brand.

Talks of the two artistes having a boxing match dominated discussions in South African hip hop in 2020. The coronavirus pandemic was said to have provoked a deferment in the date of the fight.

By early 2021, however, it became apparent that the two artistes might no longer meet in the boxing ring, after all. Each blames the other for the cancelation of the fight.

Amid the blame game, the two have not stopped taking shots at each other. AKA appears to have started the latest sally.

But will Cassper Nyovest respond to AKA’s mockery and fight dirty in the street? You can check out AKA’s mordant tweet below. 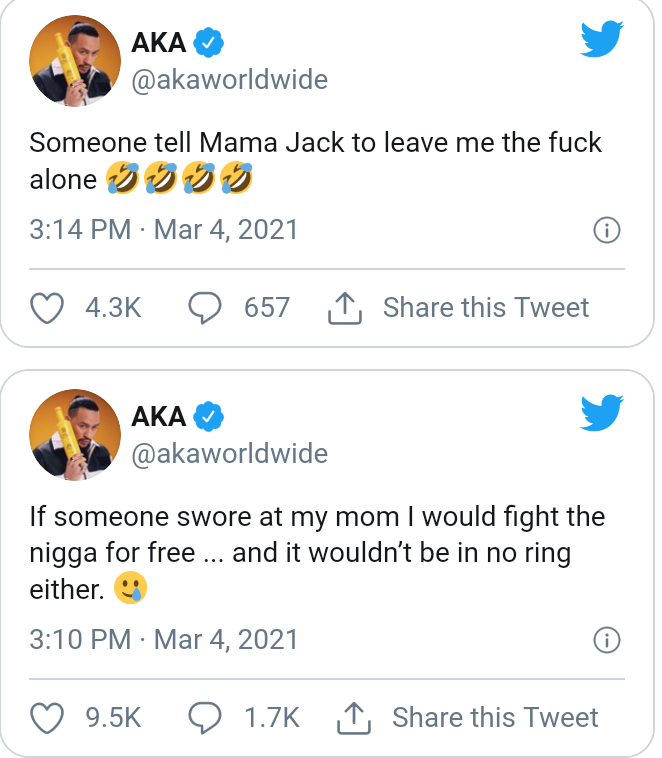 What do you think? You may want to join the conversation by dropping your thoughts in the comment section.

Tags
AKA Cassper Nyovest
John Israel A Send an email 5 March 2021
Back to top button
Close
We use cookies on our website to give you the most relevant experience by remembering your preferences and repeat visits. By clicking “Accept All”, you consent to the use of ALL the cookies. However, you may visit "Cookie Settings" to provide a controlled consent.
Cookie SettingsAccept All
Manage Privacy