SA Hip Hop star, AKA has scored his first acting gig in an upcoming local film.

This is going to be on another level. There is no doubt that Mzansi rapper, AKA would make an amazing actor. He proves this in the videos for some of his songs including “Jika” and “The Cephas Songs”.

The talented emcee has now scored his first acting gig and we expect nothing less than an amazing performance. He recently took to his Twitter page to make the announcement. According to him, his friend, Alessio Bettocchi will be releasing his first film titled “Nandi”, in which he makes a cameo. 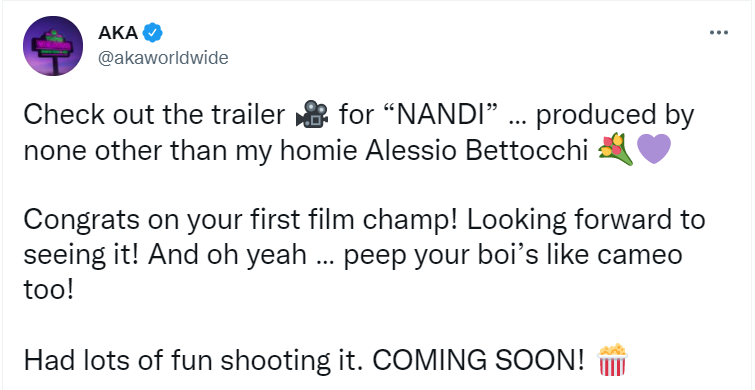 AKA also shared the official trailer for the forthcoming local film which is set to drop soon.  He shouted out Bettocchi for the work done on it and revealed that he also had fun filming the movie. Also featured in the trailer are Riky Rick and NaakMusiQ. You can check the trailer out below.

Tags
AKA
John Jabulani Send an email 4 November 2021
Back to top button
Close
We use cookies on our website to give you the most relevant experience by remembering your preferences and repeat visits. By clicking “Accept All”, you consent to the use of ALL the cookies. However, you may visit "Cookie Settings" to provide a controlled consent.
Cookie SettingsAccept All
Manage Privacy