November isn’t here yet. But it is already looking like it is going to be a magic month for Kiernan Jarry Forbes, the songster who goes by the stage name of AKA.

His “Bhovamania” EP, slated for release on 6 November, has already made it to the top of the Apple Music chart in South Africa – a record for a South African rapper.

Also, his braai show, which was previously available on his AKATV app, will now make an official debut on South African Broadcasting Corporation 1 (SABC-1). Media personality Phil Mphela announced the show’s coming to SABC-1 in a recent tweet. 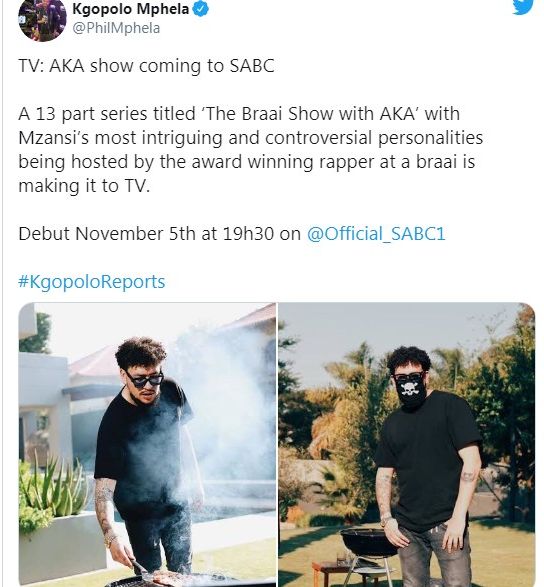 The show, dubbed The Braai Show With AKA, will be in 13 parts and play host to some of South Africa’s most controversial personalities. The show officially premieres on 5 November 2020 at exactly 7:30 pm.

Prior to the announcement of the show coming to television (SABC1), AKA had revealed, in an interview with 5FM, that he spent R5 million on the show.

The announcement of the show coming to SABC-1 is currently generating massive excitement among AKA fans. For one, fans who were previously subscribed to AKATV to watch the show cans now watch the show on SABC-1 with necessarily having to subscribe to AKATV app.