There has been so much criticism on the Amapiano genre since it began to dominate the airwaves. You would agree that the genre and its contributors have been very much criticized since it blew up and claimed the entire airwaves in the country and outside too.

A recent tweet by SA Hip Hop Disc Jockey, DJ Speedsta makes us wonder if he’s a fan of the sound. It seems he has been listening to it for a while now. The talented hit maker claims that “Amapiano DJs all play the same songs. John Wick 4 times a night”.

What do you guys think of this? Yes, there are some Amapiano jams that have dominated the airwaves in massive ways. Do you think virtually every DJ plays it? Hit the comments section with your thoughts on this. 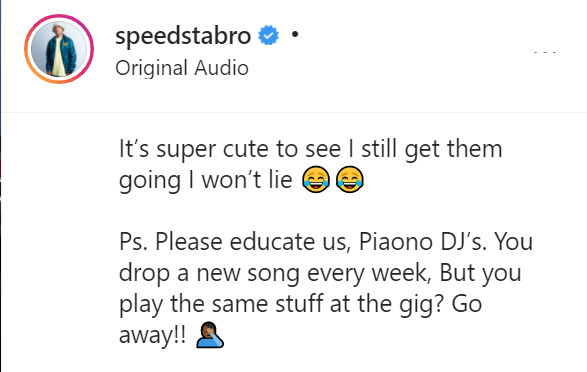