Season 2 of The Real Housewives of Durban is here and, interestingly, Ayanda Ncwane, who is no longer a part of the reality show, is trending as a result.

On the show, Nonku, who had a child for Ayanda Ncwane’s late husband, the gospel singer Sfiso Ncwane, as well as her mother, had spoken ill of Ayanda Ncwane.

Some viewers were furious that Nonku and her mother should drag Ayanda because she was not on the show to defend herself. Some people praised Ayanda for making it to the trends in Mzansi although she’s not part of the show. They also denounced Nonku for her actions. You can check out some reactions below 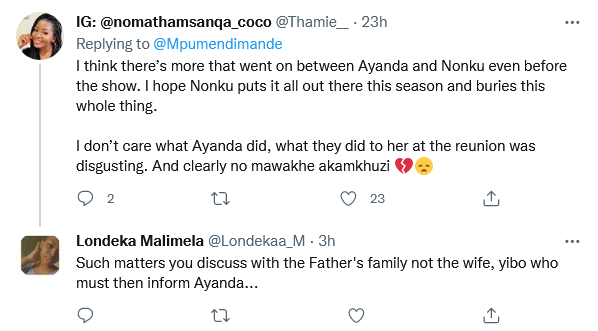 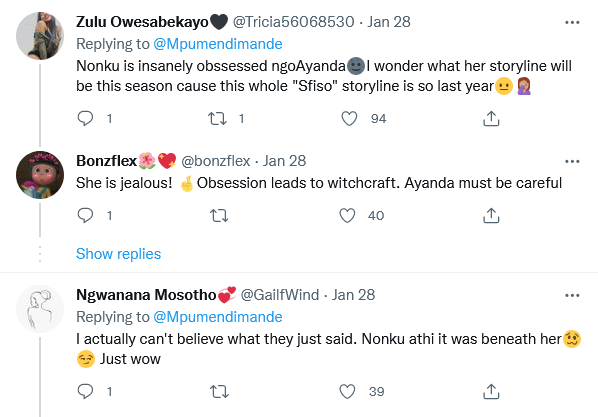 By the way, Ayanda Ncwane had voluntarily left the reality show. Commenting on her exit, she had noted that when people identify her, the emphasis is usually on her being a part of the reality show and not the great work she was doing to promote her late husband’s legacy.

She wouldn’t want a part of that identity, so she opted out. She had also made it plain she wouldn’t be returning to the show for whatever reason. So it remains to be seen how she would react to Nonku – if at all.

Tags
Ayanda Ncwane Nonku Williams
John Israel A Send an email 29 January 2022
Back to top button
Close
We use cookies on our website to give you the most relevant experience by remembering your preferences and repeat visits. By clicking “Accept All”, you consent to the use of ALL the cookies. However, you may visit "Cookie Settings" to provide a controlled consent.
Cookie SettingsAccept All
Manage Privacy