It is no longer speculation or wishful thinking. Kiernan Jarryd Forbes, professionally known as AKA, is working on a new album.

The tentative title for the imminent compilation is “Bhovamania.” He might change it before the album’s eventual release. It bears 10 tracks in all, 7 of them crossed out from the list he shared. 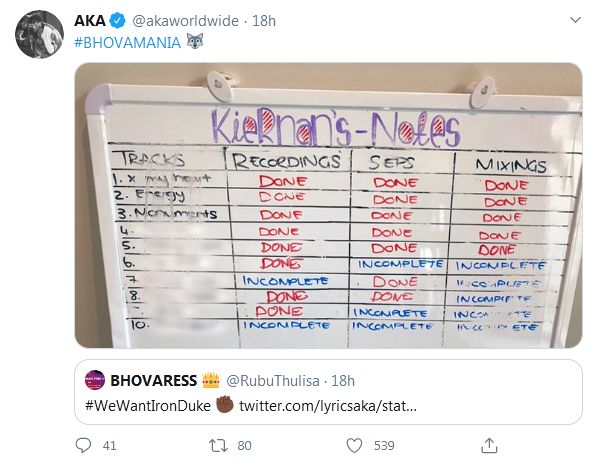 However, it was apparent AKA’s last three songs, “Cross My Heart,” “Energy,” and “monuments,” will make the cut in the imminent body of work. In fact, they are the first three tracks in the album.

All three tracks were hits with fans. So one might hazard a guess and say the finished album might be explosive. But can it rival “Touch My Blood”? We can only await the verdict of time, yes?

Although it is true AKA has an album in the pipeline, he is reluctant to share the date of release. A fan had asked for the date, but the SupaMega laughed it off with a wink. According to him, revealing the date might cause other artistes to start shifting their release dates as well.

What are your expectations regarding AKA’s imminent album? We invite you to sound off in the comment section below. Go right on.