Big Brother Mzansi housemate Tulz is being dismissed as a hypocrite and a “food thief” after viewers found him eating meat at 4 a.m. when other housemates were fast asleep.

Some viewers were miffed that he should stash meat and eat them secretly after earlier reprimanding Gash1 for eating too much. As far as these viewers were concerned, he’s the “thief” of the house. You can check out the video below.

WoW people are sleeping and the holy holy thulz is chowing meat that he stashed 😒😒
So this guy just wants the kitchen to himself and no one … 🤔#BBMzansi pic.twitter.com/UHkeJVjw1G

Previously, when Gash1 stashed the Pizza, Tulz had not a good word about him for that action. Now, according to fans of the reality show, Tulz had committed the same crime he’d earlier accused his fellow housemate of. 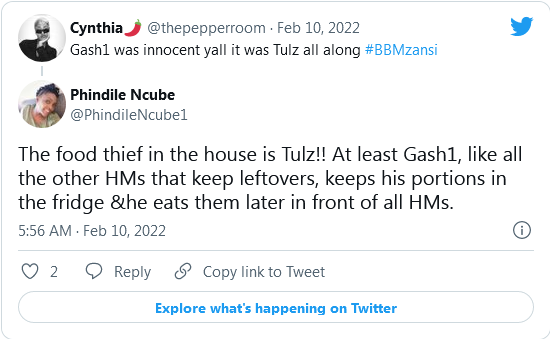 Of course, the drama in the Big Brother Mzansi house continues. Since the show was renewed for its third season, after temporarily terminating after the second season, viewers have been on the edges of their seats, following the drama.

Of course, factions have erupted, with viewers hyping their waves to win the show. But then, as the saying goes, you don’t win until you win. At the end of the day, a winner is expected to go home with an R2 million cash prize. Stay tuned, if you please, for that detail.

Tags
#BBMzansi Big Brother Mzansi Tulz
John Israel A Send an email 10 February 2022
Back to top button
Close
We use cookies on our website to give you the most relevant experience by remembering your preferences and repeat visits. By clicking “Accept All”, you consent to the use of ALL the cookies. However, you may visit "Cookie Settings" to provide a controlled consent.
Cookie SettingsAccept All
Manage Privacy