Mzansi rapper, Big Zulu thanks Mzansi for the support as his new joint tops the SA Radio Airplay this week.

Last time we checked, the official video had amassed over 3 million views in 3 weeks and is headed for 4 million. That’s very impressive. The rapper also shared a screenshot of the SA Radio Airplay and revealed that the song is leading on the list. That means he has the most played song on the radio in Mzansi right now. 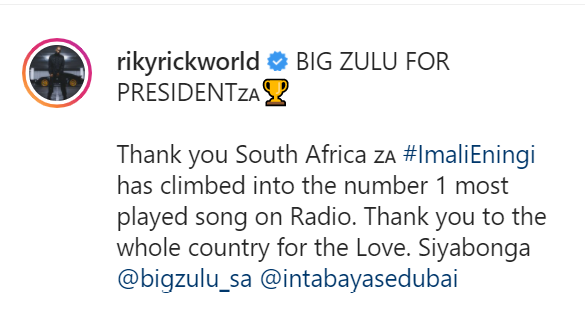 A recent video shared by Riky Rick, shows the three collaborating artists thanking Mzansi for their support since the song was released. Honestly, that’s very thoughtful of them. It is quite obvious that they would close out the year with one of the biggest songs of the season.

Tags
Big Zulu
John Jabulani Send an email 19 December 2020
Back to top button
Close
We use cookies on our website to give you the most relevant experience by remembering your preferences and repeat visits. By clicking “Accept All”, you consent to the use of ALL the cookies. However, you may visit "Cookie Settings" to provide a controlled consent.
Cookie SettingsAccept All
Manage Privacy