The album, which has an eponymous track as the lead single, premiered on 13 September 2019. It houses 11 songs in all and features the likes of Cassper Nyovest, Musiholiq, Fifi Cooper, Master Dee, Kid X, Inkosi Yamagcokama,Mnqobi Yazo and Ntsiki Mazwai  some interesting names in South African pop culture, from hip hop to maskandi.

Big Zulu shared the news of his gold triumph on his Instagram pages yesterday 4 February. He thanked everyone who had been instrumental to his achieving that. You can check ot his post below. 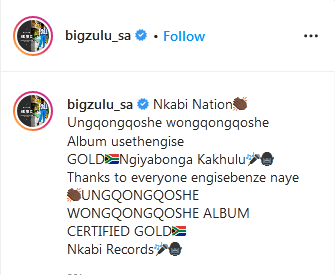 By the way, he isn’t the only one excited about the win. His fans indicated in the comments how excited they were for him and how much he deserved what he got. Fellow musos also celebrated with the “Imali Eningi” hitmaker.

The producer MBzet congratulated Big Zulu and thankedd him for making him (MBzet) a part of the album. You can check out his post below. 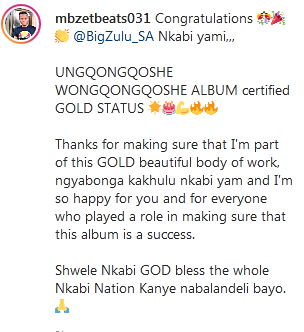 Well, what do you think of “Ungqongqoshe Wongqongqoshe” album reaching gold after almost two years?  You might want to join the conversation by dropping your thoughts in the comment section below.