South African boy band Blaq Diamond has been listed No. 1 in the list of Mtv Base South Africa’s hottest MCs for 2021.

The likes of Touchline, 25k, De Koala Tumi Tladi and Indigo Stella also made the list. You can check out the complete list below. 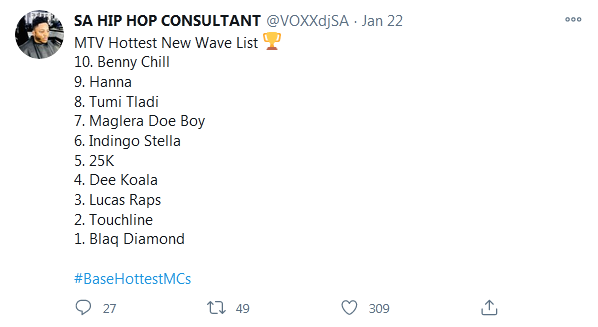 When it released the list, MTV Base South Africa had noted that Blaq Diamond is now representing the new school of hip hp. From the responses to MTV’s post, it was clear mos of their fans agree with them putting Blaq Diamond at the top of the list.

By the way, Blaq Diamond trended on South Africa Twitter following the news that the group made the Hottest MCs list this year.

It isn’t surprising the group should top the list, however. Blaq Diamond has been pretty consistent with the hits, thrilling fans to songs like “Ibhanoyi,” “Summer Yo Muthi,” and “Woza My Love.”

What do you think of the list? Do you endorse it or you would have drawn up something altogether different? You might what to join the conversation by dropping your thoughts in the comment section below.

Tags
Blaq Diamond
John Israel A Send an email 24 January 2021
Back to top button
Close
We use cookies on our website to give you the most relevant experience by remembering your preferences and repeat visits. By clicking “Accept All”, you consent to the use of ALL the cookies. However, you may visit "Cookie Settings" to provide a controlled consent.
Cookie SettingsAccept All
Manage Privacy