As we know, House music DJs and radio hosts, Euphonik and DJ Fresh are involved in an ongoing rape case. This came to light a couple of weeks back. New updates reveal that due to a lack of sufficient evidence, the National Prosecuting Authority has decided to dismiss the case.

The decision not to prosecute has since become a trending topic all over social media. The involved DJs have also taken to the platform to share several reactions.

Themba a.k.a Euphonik recently shared a meme of a detective with a magnifying. The meme also contained laughing emojis. The post has been interpreted as him making fun of the alleged victim.

This did not sit well with many who called him out on the platform. SA Hip Hop star, Boity blasted the House DJ telling him to either “confess or let your lawyers handles this”. 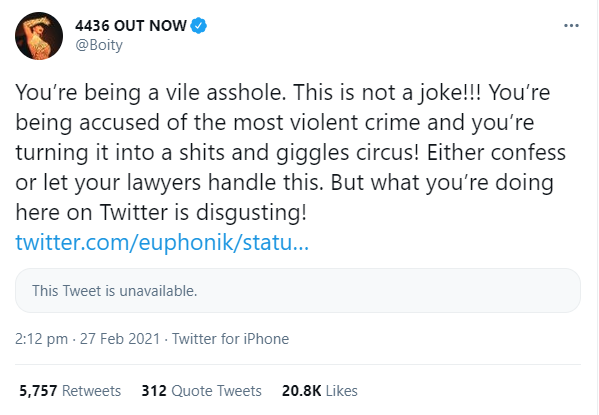 Tags
Boity Boity Thulo Euphonik Themba
John Jabulani Send an email 1 March 2021
Back to top button
Close
We use cookies on our website to give you the most relevant experience by remembering your preferences and repeat visits. By clicking “Accept All”, you consent to the use of ALL the cookies. However, you may visit "Cookie Settings" to provide a controlled consent.
Cookie SettingsAccept All
Manage Privacy