Cassper Nyovest reveals he will be getting off the Twitter platform for a while.

The rapper had a rather eventful week, as he was vigorously dragged into a beef that had to do with his rival and also got dragged by various Tweeps on the platform.

Like we all know the Twitter platform has become a lion’s den, figuratively. As Twitter users now see it as an avenue to drag and troll various celebrities.

Cassper Nyovest has had enough of it and he announces that he is bowing out of the platform. Mufasa revealed he will rather use the energy he is using to express himself in tweets, in his songs.

Cassper Nyovest taking to the Twitter platform revealed his reason being, him tired of the bad energy constantly being thrown his way from the platform.

Recall few days ago, Cassper Nyovest was dragged into a Twitter war between AKA and Sizwe, now he has had enough of that. 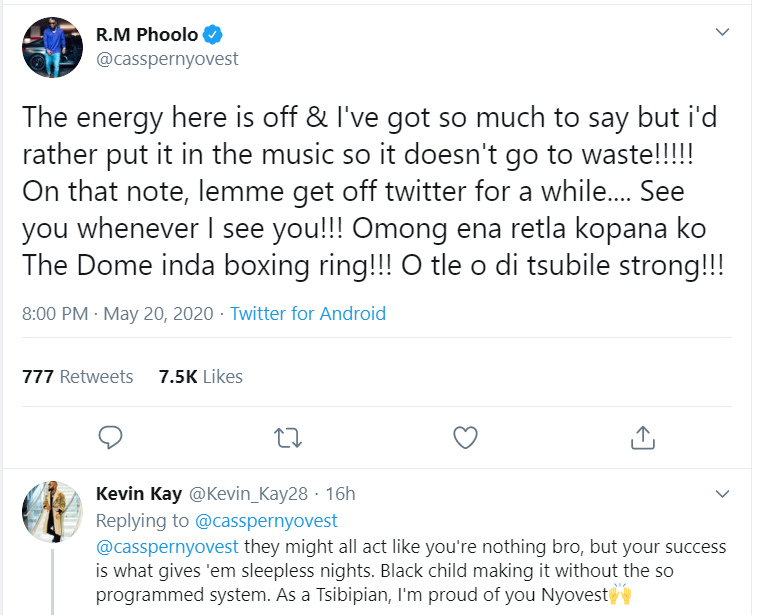 Tags
Cassper Nyovest Twitter
Wuraola Salawu Send an email 21 May 2020
Back to top button
Close
We use cookies on our website to give you the most relevant experience by remembering your preferences and repeat visits. By clicking “Accept All”, you consent to the use of ALL the cookies. However, you may visit "Cookie Settings" to provide a controlled consent.
Cookie SettingsAccept All
Manage Privacy