Days ago, DJ Speedsta lobbed a grenade at those who choose to spend their money on cars and houses instead of saving it in the era of coronavirus and lockdown.

In a tweet, the songster had noted that nothing is assured and entertainers ought to save every last rand instead of buying cars, houses, and other “frivolities” (our word). He didn’t mention names at the time he made the tweet.

However, fans were quick to infer that he was referring to Family Tree boss Cassper Nyovest, who had just celebrated his birthday by buying a customized Bentley as well as throwing a big party for his friends.

Apparently Cassper realized DJ Speedsta was actually shading him his tweet about entertainers buying cars and houses instead of saving, and he didn’t hesitate firing a shot back at the radio disc jockey and producer who has nursed several controversial opinions of recent. 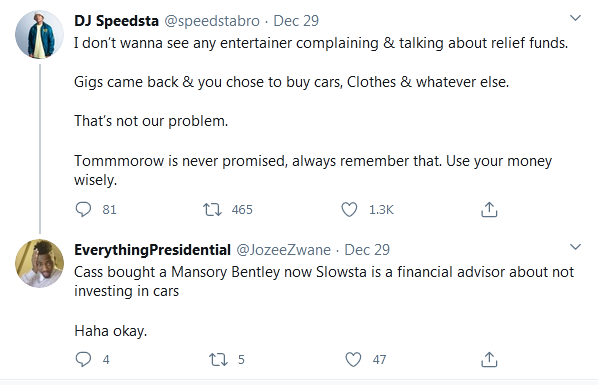 To make sure he didn’t miss Cassper Nyovest’s missile, some fans tagged DJ Speedsta to his tweet.

Like DJ Speedsta, however, he failed to mention names. He merely said envy will be the ruin of niggas Interestingly, fans were quick to infer that he had taken a shot at DJ Speedsta in his tweet.