Soon after his release from prison for armed robbery, Mzansi muso Samthing Soweto had commented that music was what saved him from a life of crime.

Apparently the “Khuleka” singer is not the only one who knows of his singing gift. Recently, Family Tree boss Cassper Nyovest commended the songster for his singing abilities. 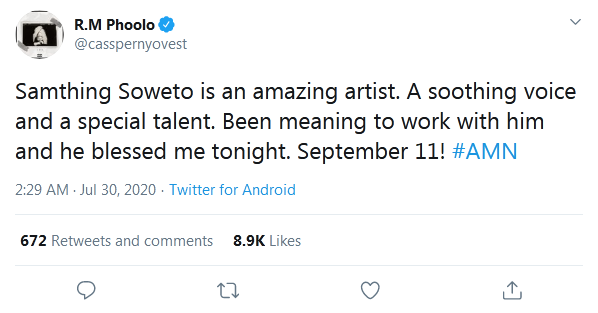 In fact, the recognition of Samthing Soweto’s abilities as a singer has inspired Cassper Nyovest to pick him as one of the guests in the imminent “Any Moment Now” album, a dedicatory compilation to his expected son with girlfriend Thobeka Majozi.

The revelation Smathing Soweto would appear in the album has left fans asking if the album would be amapiano. Well, Cass hasn’t said anything on that yet. Known for his tracks in hip hop, the songster is reportedly not shy of trying other genres.

By the way, the “AMN” album is scheduled for release on 11 September 2020, a symbolic day in world history. We will bring it to you here at UbeToo. So take this as an invitation to keep in touch. Just follow our social media channels.

Well, what do you think about Cassper Nyovest’s verdict on Samthing Soweto’s talent? You might wish to join the conversation by dropping your thoughts in the comment section below.