One-time 999 Records artiste Chomee allegedly bought a car with the money she received from the National Arts Commission (NAC) as funding for her online broadcasting project.

Chomee’s company Divatainment was said to be in the process of deregistration when she received R2 million from the NAC. She was said to have bought a car with the money thereafter.

The NAC is under the ministry of arts and culture which is headed by Nathi Mthethwa. The minister’s spokesperson Masechaba Ndlovu confirmed that the minister is aware of the allegations against Chomee and is dealing with it.

Interestingly, Chomee is not the first Records 999 artiste accused of misappropriating funds. Previously, her former boss at 999 Records, Arthur Mafokate, had been accused by his one-time manager of using funds from the National Lottery Commission (NLC) for personal and family purposes and not for the purpose for which the funds were disbursed.

Some watchers of the unfolding drama have complained how easily people linked to the 999 Records boss have easy access to funds from the NAC. 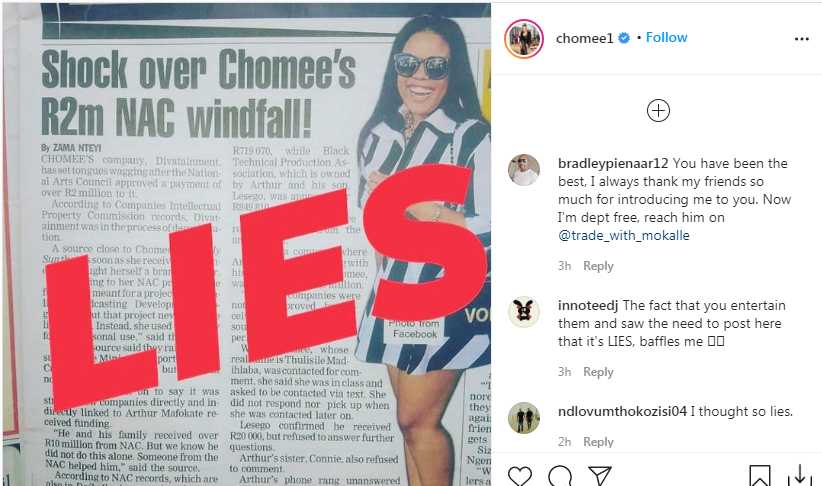 Well, it remains to be seen what the outcome of the case against Chomee will be. We’ll keep you updated on the case, so stay tuned by following our social media channels and subscribing to our newsfeed.

Tags
Chomee
John Israel A25 March 2021
Back to top button
Close
We use cookies on our website to give you the most relevant experience by remembering your preferences and repeat visits. By clicking “Accept All”, you consent to the use of ALL the cookies. However, you may visit "Cookie Settings" to provide a controlled consent.
Cookie SettingsAccept All
Manage Privacy