n her birthday, Murdah Bongz had shown her serious love. And then it was DJ Zinhle’s turn to spoil her boyfriend and one-half of the Black Motion duo.

Since their affair became public, Murdah Bongz and DJ Zinhle have been giving Mzansi couple goals, showering each other with serious loving, leaving some social media users wondering why DJ Zinhle “wasted her time” with AKA twice.

Murdah Bong turned 34 yesterday, and DJ Zinhle joined the muso’s fans to wish him and incredible birthday. She described him as awesome and wished him a day with a similar descriptive adjective. He said she is incredibly thankful for him, her “love.” You can check out her message below. 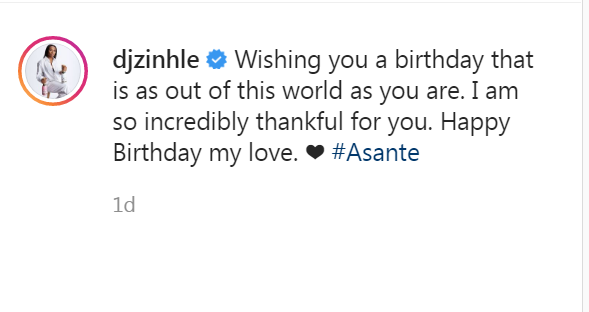 DJ Zinhle started dating Bongz after breaking up with AKA for a second time. She and Bongz were a tease at the outset, slowing unveiling their relationship and amusing those who had suspected they were in a relationship after all.

It’s been a good run for the two so far, hopefully they enjoy the relationship as long as it lasts

Well, what do you think of DJ Zinhle’s message to Murdah bongz at 34? You’re welcome to join the conversation by dropping your thoughts in the comment section