Cassper Nyovest hints on not dropping any new singles before the release of his upcoming album, Any Minute Now ‘A.M.N’.

Cassper Nyovest’s forthcoming album may be dropping Any Minute Now but he doesn’t seem  to be releasing any more songs to support it. Bummer right? Well, that’s Cass for you. He has enough confidence in the songs he’s already released and he isn’t going to change his mind.

The rapper hinted on the new info while replying a comment a fan posted on one of his posts. The fan had talked about the upcoming album, and Mufasa replied further stressing his point that his Tweezy collab, Amademoni is a hit.

While not everyone concurred to it except his fans, he revealed that it was the same as all his other songs which have mostly been sleeper hits. He also hinted on “Amademoni” being the only song he would release before the album drops in September. 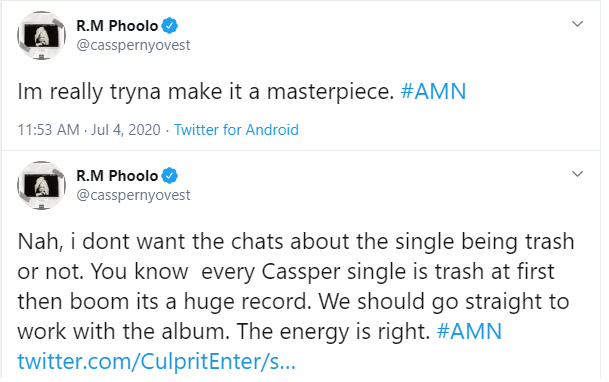