Mzansi rapper Flvme is still very much aflame, letting the world know he is among the best out there – if not the very best.

Just recently, he got into a clout war with compatriot Emtee. The two lobbed verbal grenades at each other over who was the best, throwing in their music stats to amplify their positions.

So hot was the exchange that another Mzansi muso, Da L.E.S., had to intervene, urging the two to stop their embarrassing public display.

Well, it appears like Flvme is still in the mood to draw blood – but from a different artiste, Cassper Nyovest, who, incidentally, has had hot exchanges with Emtee previously.

The war with Emtee has somehow spilled into Cassper Nyovest’s territory. Commenting on the war between Flvme and Emtee, a fan, had noted that most times, trashy artistes, referencing Cassper Nyovest, get hyped more than those who produce finer art.

Flvme agreed, stating he and the fan share the same opinion on the subject. The fan wanted to know if Flvme thinks Cassper produces trash. Flvme affirmed Cassper Nyovest’s greatness but insists the Family Tree boss will never make better music than him, trash or not. 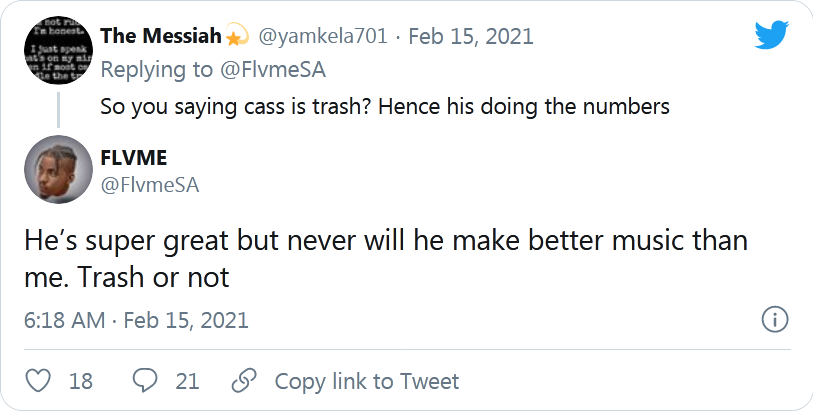