Prince Kaybee is not pleased at the moment, but it is hard to determine who his displeasure is directed at. Well, we can say it has to do with the music industry and music production.

Recently, the “Gugulethu” hitmaker posted that is is wrong to sound the same way throughout an album. Who, exactly, the shade was directed at is hard to determine, but many are pointing in the direction of amapiano champ DJ Maphorisa, who has had a fever of releases recently, solo and in collaboration with Kabza De Small.

Prince Kaybee admitted he had been in a similar position himself, masterminded of an album with the same beat throughout. He had learned from that mistake, though.

A key lesson, according to him is that the music will sound force. So it is vital an artiste takes a break from the music now and then – make an album over a longer period of time.

Check out Prince Kaybee’s position in the screenshot below. 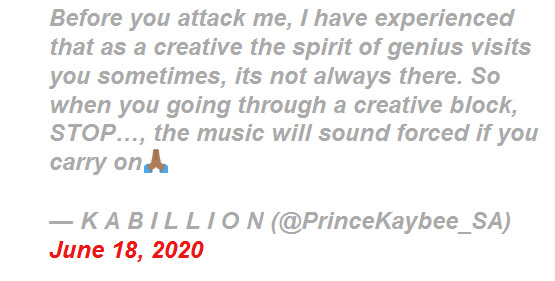 What do you think of Prince Kaybee’s advice? Who do you imagine he is referring to in his tweet? You may want to join the conversation bry dropping your thoughts in the comment section below.

Tags
Prince Kaybee
John Israel A Send an email 20 June 2020
Back to top button
Close
We use cookies on our website to give you the most relevant experience by remembering your preferences and repeat visits. By clicking “Accept All”, you consent to the use of ALL the cookies. However, you may visit "Cookie Settings" to provide a controlled consent.
Cookie SettingsAccept All
Manage Privacy