Here’s the reason why Emtee warned Chad Da Don to not work with Cruz Afrika.

For someone who is currently at the peak of his game in the SA Hip Hop scene, Emtee has had his fair share of battles, and betrayals. The talented muso is not afraid to speak out about any of them, and Mzansi knows that.

The “Johustleburg” hit maker went out of his way recently to warn Chad da Don to desist from working with Cruz Afrika. The popular rapper had tweeted praising his verse on a song with Cruz. The tweet caught Emtee’s attention who decided to react to it and warn him against working with the rapper.

He revealed that Cruz once hot him arrested and ruined his reputation on the streets. He also revealed he told everyone that he was with the illuminati, and warned him against working with him. What do you guys think about it? 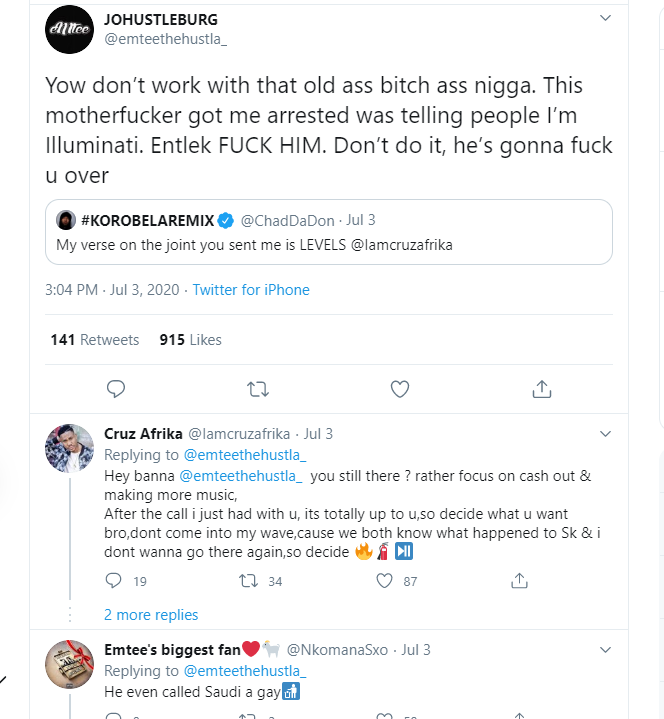 Tags
Chad Da Don Cruz Afrika Emtee
John Jabulani Send an email 5 July 2020
Back to top button
Close
We use cookies on our website to give you the most relevant experience by remembering your preferences and repeat visits. By clicking “Accept All”, you consent to the use of ALL the cookies. However, you may visit "Cookie Settings" to provide a controlled consent.
Cookie SettingsAccept All
Manage Privacy