It is definitely a great day for emerging Mzansi rapper, Ayanda Mokgopa aka K1 Jaxe who was recently announced winner of the Jameson “Rap A Verse With Kwesta” contest. The talented muso was selected from a whopping 1,420 entries, beating out the entire competition to claim the prize.

Kwesta revealed that he found exactly what he was looking for in him. According to him, he was searching for someone with a hunger to make music, who wants to live for it, and has the dream. He revealed he wanted to feel that in just one verse. He wanted to feel the continuation of a career, something that didn’t end there.

About K1 Jaxe, he revealed he saw his desire not just from his bars but also after speaking to him while choosing the finalist. As the winner, he gets to record a joint with Kwesta, and also go on a trip or two to the Jameson distillery in Ireland.

I was looking for someone who wants to make music, who lives for this thing, who has a dream of making music. Beyond that, I didn’t just want one good verse, I wanted to see something in the person with that little verse. I wanted to feel that there was something more behind this verse and the artist. I wanted to feel the continuation of a career.

Apart from the fact that he’s an amazing rapper, I spoke to him a couple of times while we were choosing the finalists and I felt his personality and I saw his desire. He has a desire to be in this game, he has a desire to rap and start a career in music. – Kwesta 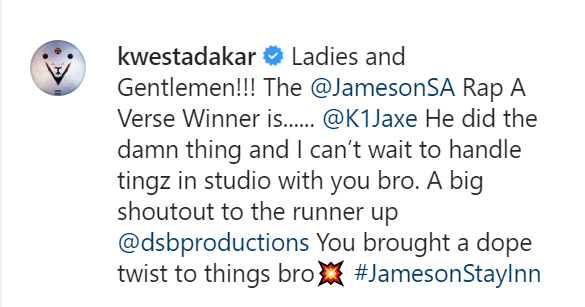 Tags
K1 Jaxe Kwesta
John Jabulani Send an email 23 June 2020
Back to top button
Close
We use cookies on our website to give you the most relevant experience by remembering your preferences and repeat visits. By clicking “Accept All”, you consent to the use of ALL the cookies. However, you may visit "Cookie Settings" to provide a controlled consent.
Cookie SettingsAccept All
Manage Privacy