It appears like “Dance Comigo” songstress Kelly Khumalo is not ready to forgive her baby daddy Jub Jub and move on just yet.

Soon after Jub Jub apologized to her publicly and indicated his interest in being present in the life of their son, she’s indicated in a social media post that she isn’t ready for him just yet.

“That TOXIC monster who you saw in the end is who they really are. Never doubt yourself again when they act nice. God allows them to show off to you so wouldn’t waste your time and go back.” 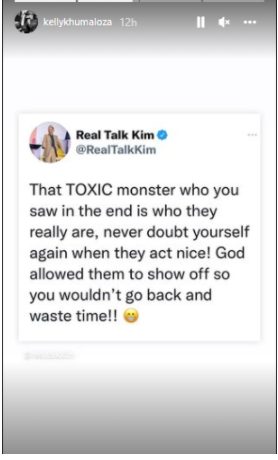 The message wasn’t lost on the fans on the songstress, who realized immediately that she’d indirectly fired a shot at Jub Jub.

In a recent interview with MacG during an appearance on Podcast and Chill, Jub Jub had called Kelly Khumalo a witch and noted that he “smashed” Amanda Du-Pont.

Amanda had countered in a view posted to her Instagram channel that Jub Jub actually raped her and used threats to keep her quiet. The reactions were instant and Jub Jub was instantly canceled.

Although he apologized to Amanda soon after, he denied ever raping her. He also didn’t apologize to Kelly Khumalo at the time. The current apology is considered an afterthought.

Tags
Jub Jub Kelly Khumalo
John Israel A Send an email 14 February 2022
Back to top button
Close
We use cookies on our website to give you the most relevant experience by remembering your preferences and repeat visits. By clicking “Accept All”, you consent to the use of ALL the cookies. However, you may visit "Cookie Settings" to provide a controlled consent.
Cookie SettingsAccept All
Manage Privacy