South African singer King Monada is celebrating 10 years of marriage to his first wife, and he couldn’t be happier.

In a recent post to his Instagram page, the bolobedu house music ace noted that it’s been two decades with his wife. He admitted the journey hasn’t been easy but it’s been worth it. He also expressed the hope of spending more decades with her. 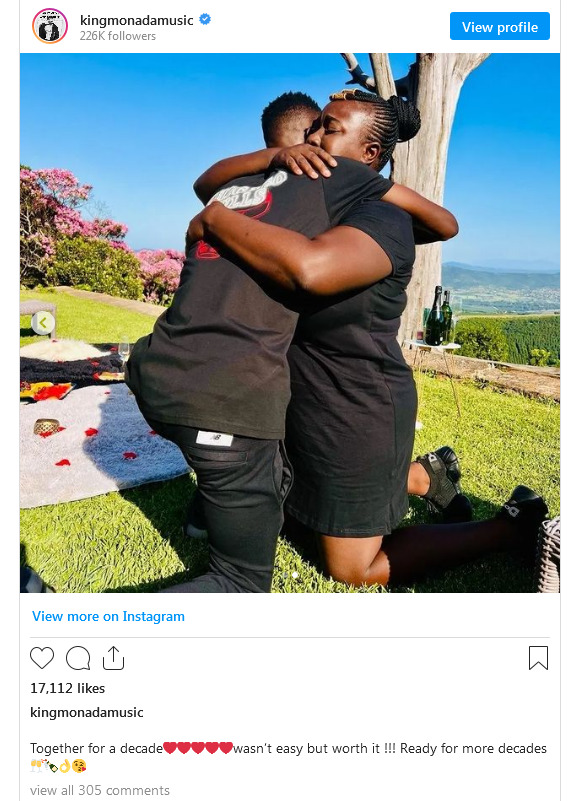 In a tweet, he got a bit deep, noting that if someone should tell him she loves him, he might not believe the person. But if the person should show him, then he will. The tweet was accompanied by a clip of him proposing to his wife.

If you tell me you love me, I might not believe you but if you show me you do, then I will.❤️😘🥂🍾📝 pic.twitter.com/Wc71LPTQ2O

years back, King Monada had trended after reports hit social media that he had sent his second wife away. The wife was said to have become unmanageable, always attacking the singer. So he sent her home to learn some manners from her mother.

The years have passed and King Monada had continued pushing the music and, of course, enjoying the wife of his youth. And when he reached a milestone with her, he celebrated the moment the way he saw fit. And fans were in the comments to wish the couple the best going forward.

Tags
King Monada
John Israel A Send an email 14 February 2022
Back to top button
Close
We use cookies on our website to give you the most relevant experience by remembering your preferences and repeat visits. By clicking “Accept All”, you consent to the use of ALL the cookies. However, you may visit "Cookie Settings" to provide a controlled consent.
Cookie SettingsAccept All
Manage Privacy