Mzansi singer, Lady Zamar has announced her return to the music scene with a new song titled “Find Me Now”.

Can you believe it? It has been over three years since Lady Zamar released any music of her own. How does anyone that talented take so much time away from her fans? How?

We are excited to see her back on the scene and doing what she does best. Taking to social media, the “Collide” star announced her new song, “Find Me Now”. She shared the official artwork for the song and some information about it. Zamar revealed that it was fitting to release a song written from a place of hope and love after all the time she took.

She also revealed that the song would be released on April 22nd. It was co-written by JR Afrika and produced by Dlala Mlungu and Lee Global. Big shout-out to her. 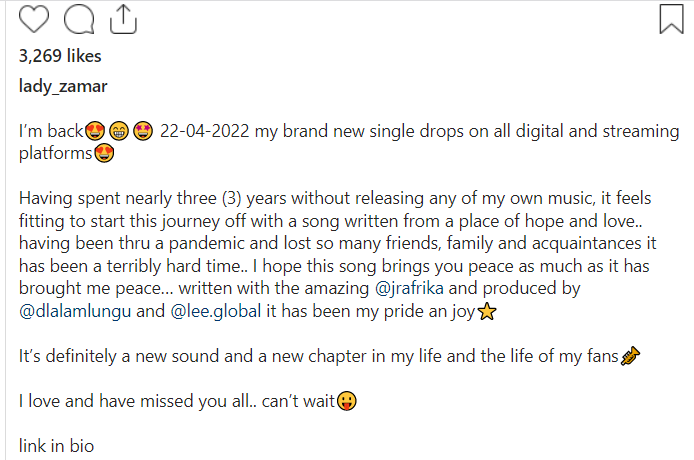 Tags
Lady Zamar
John Jabulani Send an email 7 April 2022
Back to top button
Close
We use cookies on our website to give you the most relevant experience by remembering your preferences and repeat visits. By clicking “Accept All”, you consent to the use of ALL the cookies. However, you may visit "Cookie Settings" to provide a controlled consent.
Cookie SettingsAccept All
Manage Privacy