Multi-award-winning South African rapper, AKA, is fed up with complaints people are making with regards to the costly subscription fee to gain access to his AKA TV app.

The coronavirus pandemic has forced everyone to remain indoors in a bid to combat the spread of the virus. Because of this, several concerts and events have been cancelled or postponed until a later date. Several artists have been adopting initiatives in order to keep their fans entertained. The ‘Fela In Versace’ hitmaker has launched an app, which is available on Play Store and Apple Store, to keep his fans thrilled during the lockdown.

To access the app, one would need to pay a subscription fee. However, some fans have complained about the costly nature of the subscription. They believe that Supa Mega should charge a considerable price for accessing the app.

Support local” they say, But it’s hard to blindly support without fully understanding what you are getting in to. It’s R50 now, R600 a year. And that’s money. So some of us want to understand what we’re signing up for, I love aka but I can’t just blindly support him.

Supa Mega responded by revealing the amount of money he invested in his application. He also urged his fans to subscribe to the app.

It costs me 40k per episode, 4 times a month, OUT OF MY OWN pocket right now. That’s 160k p/m. I’m asking you for 50 bucks. While not doing a single gig. I’m putting myself out there and you still complaining. Hayi man. Just buy a ticket broer.

AKA stated that he is tired of the complaints he has been receiving. He remarked that people could only complain after they must have subscribed to his AKA TV.

I am only interested in the complaints and feedback of people that are currently subscribed to #AKATV, Its called CUSTOMER service for a reason. 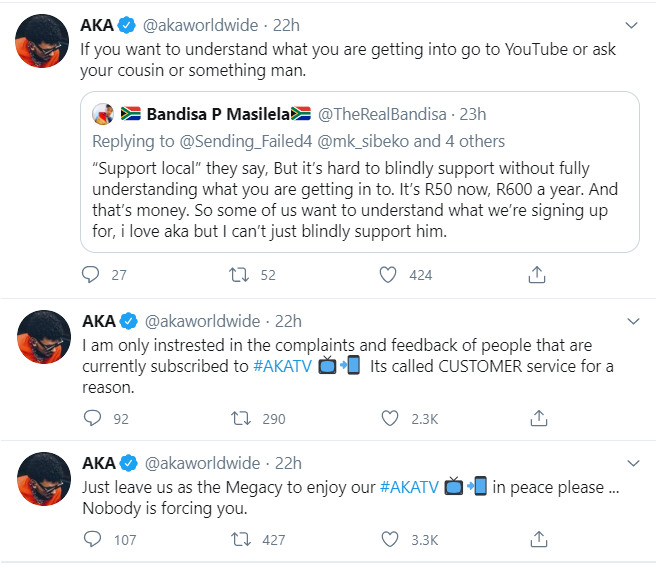