As the world accelerates to February, the release date of South African disc jockey Black Coffee’s “Subconsciously” album, the songster has treated fans to a teaser of a song from the imminent compilation.

Titled “Never Gonna Forget,” the track features Elderbrook. Interestingly, it is one of the most memorable releases from the upcoming album yet.

“Never Gonna Forget” has a markedly house note to it. But then the guitar instrumental just cannot be missed. It is a song with a laid-back charm that never fails to excite. In fact, we see the teaser creating a hunger for the full track in the soul of fans.

It begins with Elderbrook’s powerful yet relaxing voice. You can check out the teaser below. 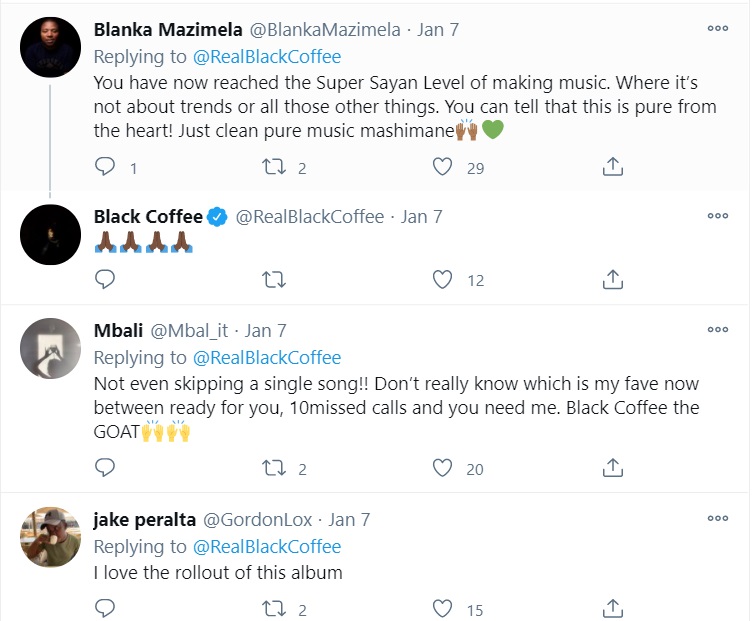 By the way, Black Coffee recently received a jacket gift from Canadian rapper Drake. He shared a picture of him rocking the jacket and thanking Drake for it, describing the gift as having arrived just on time. The gift amplifies his position as one of South Africa’s notable entertainers.

What do you think of the teaser featuring Elderbrook? Does it make you look forward to the promised album? You may want to join the conversation by dropping your thoughts in the comment section below.

Tags
Black Coffee Elderbrook
John Israel A Send an email 14 January 2021
Back to top button
Close
We use cookies on our website to give you the most relevant experience by remembering your preferences and repeat visits. By clicking “Accept All”, you consent to the use of ALL the cookies. However, you may visit "Cookie Settings" to provide a controlled consent.
Cookie SettingsAccept All
Manage Privacy