Celebrated Venda artiste Makhadzi has sparked dating rumours with Focalistic after sharing a picture of them together.

As caption to the photo of them, Makhadzi had stated that she met her “thinging” and followed it up with a laughing emoji. The two appeared in a lighter mood.

Fans have been curious about the photo, with some of them asking out loud if the two are now dating. Other fans didn’t care for such questions. To them, musos Makhadzi and Focalistic are already dating, and they wish the dating duo the best going forward. 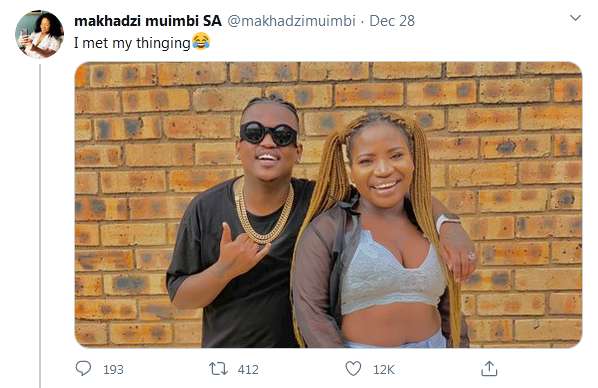 One fan, who goes by the Twitter handle @MagebaNjabulo, even made it clear that Makhadzi deserves to be happy, after all.

So far, neither Makhadzi nor Focalistic has confirmed nor denied the dating rumours. Well, the coming weeks should reveal a lot. If they are indeed dating, they cannot hide their relationship for ever.

By the way, Makhadzi split with Master KG months ago. He had been denounced at the time he announced the split to the world because Makhadzi was trending at the time for her sterling performance on Lockdown House Party.

So do you think Makhadzi and Focalistic are dating? You may share your thoughts below.

Tags
Focalistic Makhadzi
John Israel A Send an email 30 December 2020
Back to top button
Close
We use cookies on our website to give you the most relevant experience by remembering your preferences and repeat visits. By clicking “Accept All”, you consent to the use of ALL the cookies. However, you may visit "Cookie Settings" to provide a controlled consent.
Cookie SettingsAccept All
Manage Privacy