Music producer Makwa has raised eyebrows after he dropped a cryptic message on Instagram that hinted thy all wasn’t well from his angle.

In the said post, the musician had written “until we meet again” over a black background.

The post Alarmed many of his fans, including his celeb associates, who encouraged him to switch on his phone so they can reach him or else call someone and share his challenges.

One notable voice in the comment section was Kiernan “AKA” Forbes. The “Touch My Blood” rapper encouraged Makwa to pick up his phone and his associates will a yet to reach him. He noted there was more to life than music. You can check out the post below. 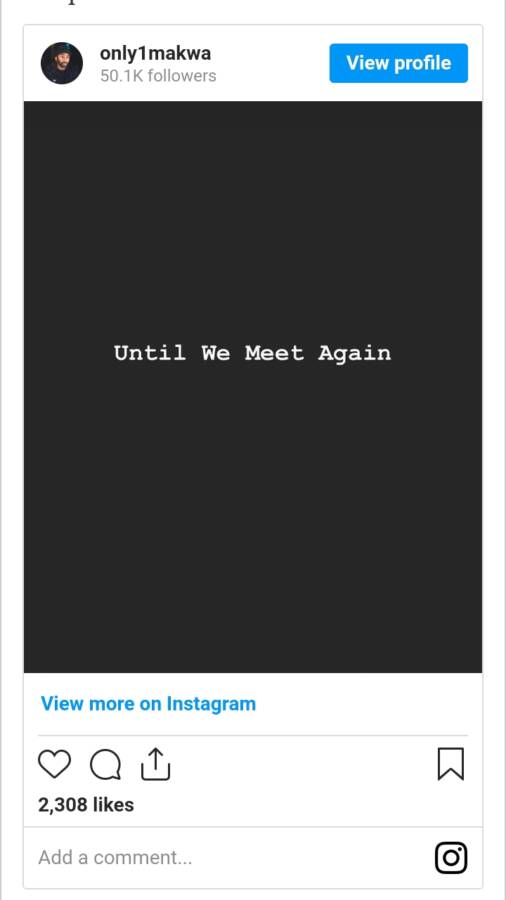 The massive concern Makwa’s post generated is understandable. The industry has been hit with a couple of unexpected deaths recently. The most recent of these deaths is the suicide by hanging of “Boss Zonke” rapper Riky Rick.

Before his suicide, Riky Rick had released a cryptic tweet that indicated he was going through a bad patch. Not many took the post serious at the time.

Having made that post that alarmed many, Makwa is seriously being watched. And his associates are reaching out. Stay tuned.

Tags
Makwa
John Israel A Send an email 20 April 2022
Back to top button
Close
We use cookies on our website to give you the most relevant experience by remembering your preferences and repeat visits. By clicking “Accept All”, you consent to the use of ALL the cookies. However, you may visit "Cookie Settings" to provide a controlled consent.
Cookie SettingsAccept All
Manage Privacy