It looks like the American singer Janet Jackson, part of the defunct Jackson Five, is the latest to be infected with the “Jerusalema” virus.

Yesterday 2 September 2020, the famous singer posted a clip of a kid dancing to the song, with the caption “Get it sis!” she tagged Master KG to the tweet, which you can check out below.

A grateful Master KG responded with a “thank you” tweet, stating the singer is much loved in South Africa. 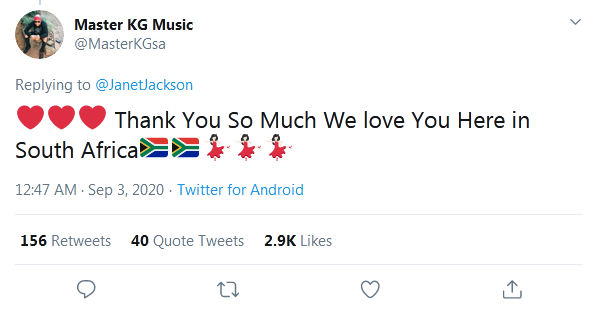 With the recent endorsement from Janet Jackson, many out there might want to check out the music video. More curiosity about the song means more views on YouTube. Ultimately “Jerusalema” might hit 1 billion views as Master KG’s compatriot Cassper Nyovest had predicted.

Janet Jackson is the latest in big-name celebs to endorse the song. Her endorsement comes just hours after the footballer Christian Ronaldo shared a clip of his family rocking the song.

“Jerusalema” is Master KG’s biggest song to date.  Although he’s released a remix to the song and is even considering a second remix with two guest artistes, it is doubtful both can snatch the record of the original.

Or what do you think? You can watch the “Jerusalema” music video below if you haven’t already.

Tags
Janet Jackson Master KG
John Israel A Send an email 3 September 2020
Back to top button
Close
We use cookies on our website to give you the most relevant experience by remembering your preferences and repeat visits. By clicking “Accept All”, you consent to the use of ALL the cookies. However, you may visit "Cookie Settings" to provide a controlled consent.
Cookie SettingsAccept All
Manage Privacy