Over a year after it was released, Master KG and Nomcebo’s “Jerusalema” song continues to do impressive numbers, increasing the songster’s musical appeal and, well, bank balance.

It has just been revealed that the song, which spawned a dance challenge at the height of its power, is now the most streamed African song on Spotify, with about 220.4 million streams. It’s also the fifth most watched African video on YouTube, with 377 million views.

African Fact Zone revealed this much in a tweet and a delighted Master KG shared it with a couple of heart emojis, indicating how pleased he was with news. You can check out the tweet below. 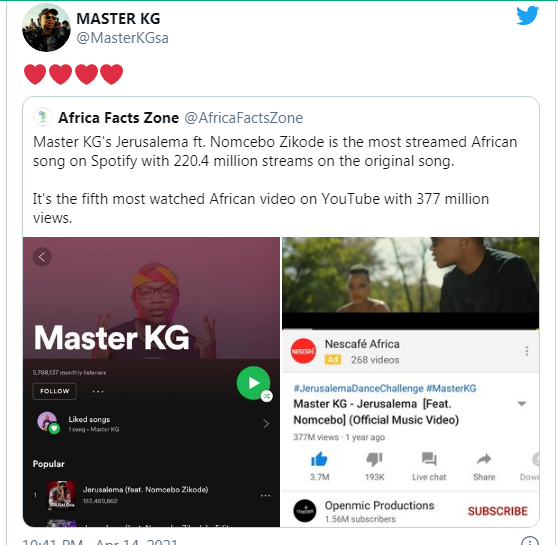 Before Master KG released “Jerusalema,” he had released a couple of other hits, but came close to the worldwide appeal of his currently trending song. And although the songster has released a remix of the song, it didn’t do as great as the original.

In fact, there’s an album from Master KG titled “Jerusalema” that still didn’t do the numbers of the song. Not only is the original song a hit in South Africa, it has become a hit in other countries as well, including Switzerland.