A year ago, toward the end of 2020, amapiano DJs and record producers Mr JazziQ and Busta 929 released a project they called “Mabajabul’Abantu.” A year after, they are set to release Vol. 2 of the project.

Busta 929 announced the second volume of the project in a recent post to instagram. He gave no timeline when fans should expect it, though.

Also, he wasn’t forthcoming on the tracklist and who and who might be featured as guests. All the same, from the reactions to his post, it was clear that fans couldn’t wait to listen to what the songster and his pal have got in the works.

The previous project was a hit with the amapiano crowd, so many fans are just as confident the imminent one will be a smash as well – apparent in the storm of flame emojis as comments. 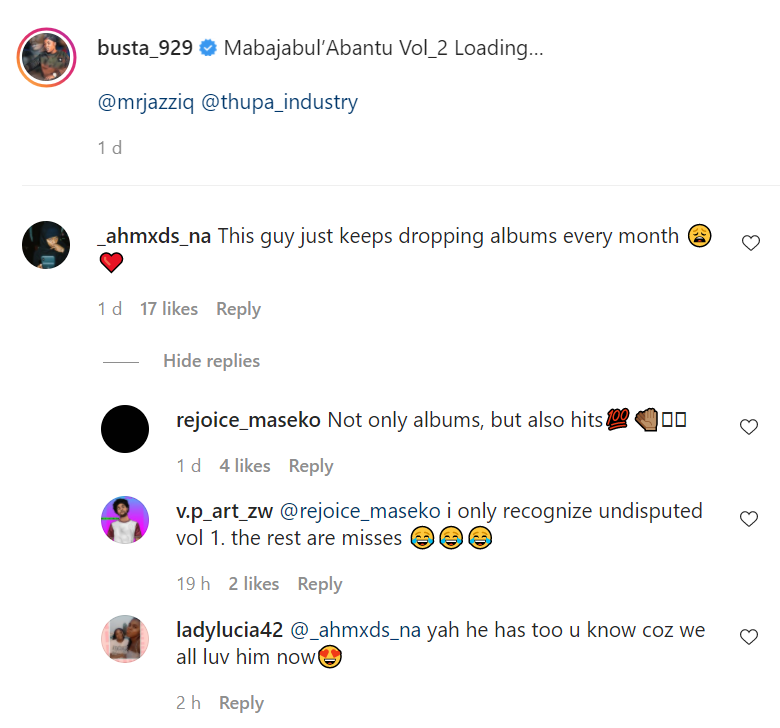 Well, whatever it is they are working on, we’ll bring it to you unfailingly. In order not to miss anything, you may want to follows our social media channels, subscribe to our newsfeed, and stay tuned for updates.

At the rate Mr JazziQ and Busta 929 are collaborating, we wouldn’t be surprised to see them become a group in the coming days.

Tags
Busta 929 Mr JazziQ
John Israel A Send an email 30 November 2021
Back to top button
Close
We use cookies on our website to give you the most relevant experience by remembering your preferences and repeat visits. By clicking “Accept All”, you consent to the use of ALL the cookies. However, you may visit "Cookie Settings" to provide a controlled consent.
Cookie SettingsAccept All
Manage Privacy