It appears like the drama between Babes Wodumo and Makhadzi is not over just yet, as South Africans are calling out Mampintsha to address the issue and put it to rest once and for all.

If you missed the backstory, here it is: in a recent Instagram Live session, Babes Wodumo had denounced Makhadzi and accused her of sleeping with her husband Mampintsha.

She also threatened to beat Makhazi up whenever she runs into the “Kokovha” singer. Apart from Makhadzi, Babes Wodumo had also used foul language against her mother-in-law.

While she later apologized for how she addressed her mother-in-law, describing her action as an attempt to promote her new album, “Crown,” she refused to apologize to Makhadzi.

I a post on social media, Makhadzi had laughed off the now-viral video in which Babes Wodumo accused her of sleeping with Mampintsha. She made it known that she was aware Babes Wodumo’s action was just a publicity stunt.

Interesting, Mampintsha has not said anything since then. And fans don’t like it that he’s been silent. So now fans are calling him out to speak up and speak out about the Babes Wodumo and Makhadzi tiff. 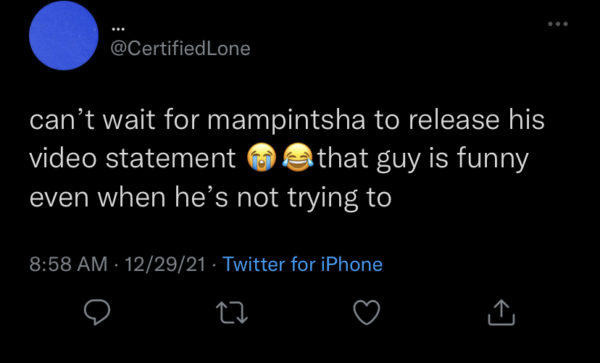 But will Mampintsha address the issue? We’ll be here to bring you the details.

Tags
Mampintsha
John Israel A Send an email 30 December 2021
Back to top button
Close
We use cookies on our website to give you the most relevant experience by remembering your preferences and repeat visits. By clicking “Accept All”, you consent to the use of ALL the cookies. However, you may visit "Cookie Settings" to provide a controlled consent.
Cookie SettingsAccept All
Manage Privacy